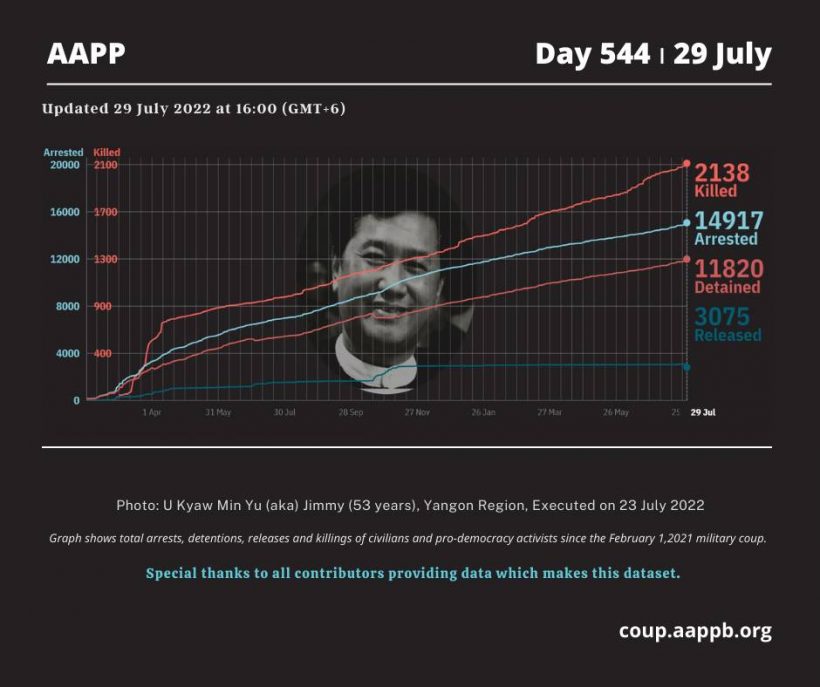 Since the February 1, 2021 military coup and the emergence of the Spring Revolution, a total of  (2138) people, pro-democracy activists and other civilians have been killed through military crackdown following pro-democracy movements. AAPP compiled and documented (5) fallen heroes today. These (5) fallen heroes, from Pauk Township in Magway Region, were killed on previous days, but documented today.

According to AAPP investigations, (2) children were sentenced the death penalty by martial court but are still facing trial at juvenile court, therefore they have been moved to the ‘facing trial list’. In addition, 1 man and 1 woman were initially sentenced to death, but due to a successful appealment, they have had their charges changed to life imprisonment.

These are the numbers verified by AAPP. The actual numbers are likely much higher. We will continue to update accordingly.

On the early morning of July 27, the junta soldiers were unable to find an activist when they raided a house in Kant Kaw Myaing Ward, Myaungmya Township, Ayeyarwady Region, so they arrested Khin Thet Nwel, Ye Khaung Soe and Mann Gyi as hostages – who were at the house at the time.