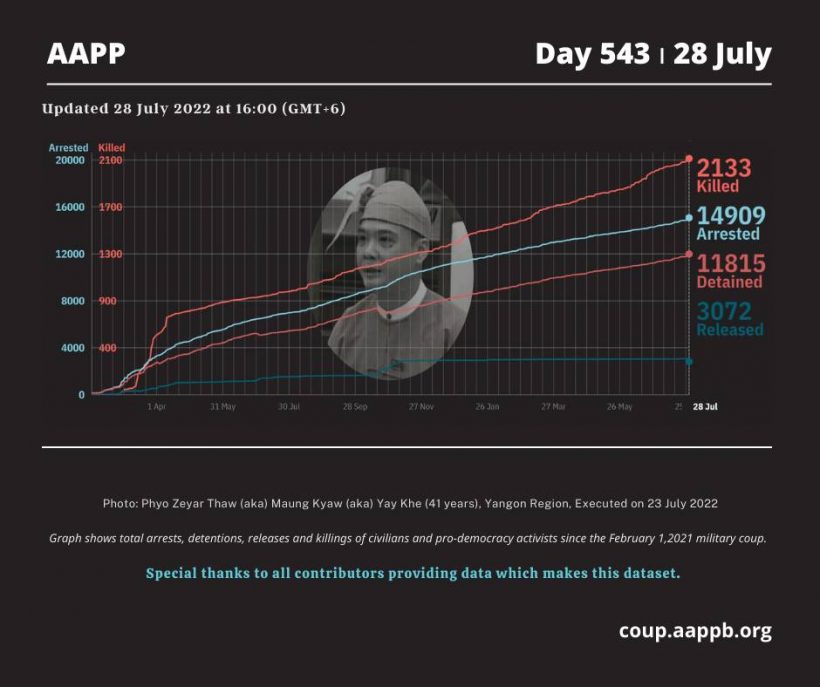 Since the February 1, 2021 military coup and the emergence of the Spring Revolution, a total of  (2133) people, pro-democracy activists and other civilians have been killed through military crackdown following pro-democracy movements. AAPP compiled and documented (2) fallen heroes today. These (2) fallen heroes, from Pauk Township in Magway Region and Hakha Township in Chin State, were killed on previous days, but documented today. This is the number verified by AAPP. The actual number of fatalities is likely much higher. We will continue to update accordingly.

According to AAPP investigations, (2) children were sentenced the death penalty by martial court but are still facing trial at juvenile court, therefore they have been moved to the ‘facing trial list’. In addition, 1 man and 1 woman were initially sentenced to death, but due to successful appealment they have had their charges changed to life imprisonment.

On July 27 at around 8 am, Junta soldiers and Pyu Saw Htee members fired artillery shells at Kyar Pyit Kan Village in Pauk Township, Magway Region. Consequently, a four and a half year old local named Theint Theint Phyu died instantly from one of the artillery shells while she was playing in her compound.

On the morning of July 25, the villagers from Hniarlawn Village in Hakha Township, Chin State ran away as the armed wing of the Junta entered the village. A local villager named Salai Mang Lian San was shot in the thigh and died due to severe bleeding. He had run into the soldiers whilst driving a motorbike to pick up and rescue children from the  nursery school at the village.