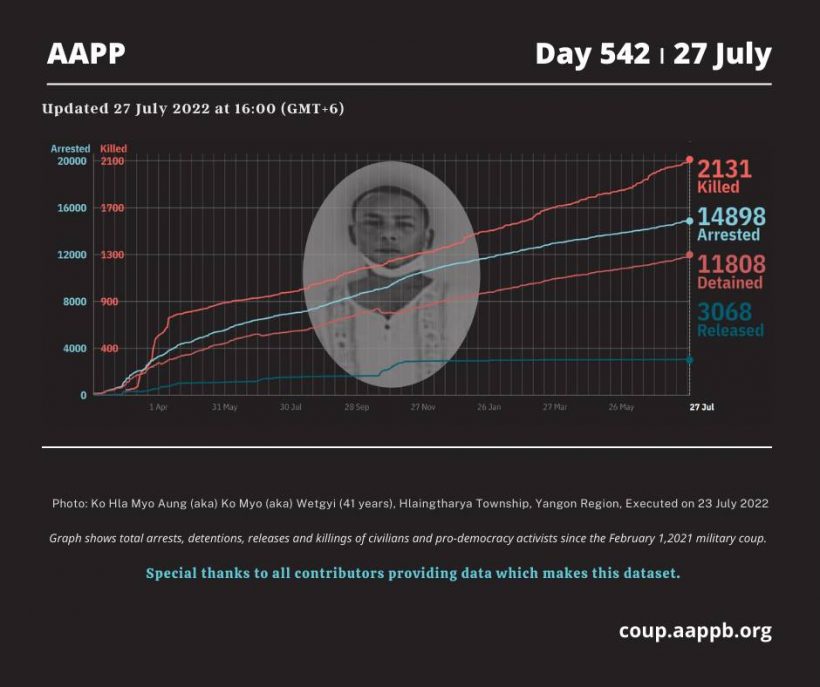 Since the February 1, 2021 military coup and the emergence of the Spring Revolution, a total of  (2131) people, pro-democracy activists and other civilians have been killed through military crackdown following pro-democracy movements. AAPP compiled and documented (8) fallen heroes today. These (8) fallen heroes, from Mingalartaungnyunt Township in Yangon Region, Khin-U Township and Salingyi Township in Sagaing Region, were killed on previous days, but documented today. This is the number verified by AAPP. The actual number of fatalities is likely much higher. We will continue to update accordingly.

At around 7 am on July 26, a military convoy carrying around 80 soldiers arrived near Magyee Oak Village, Khin-U Township, Sagaing Region, and opened fire. As a result, 14-year old Khant Khant Nyein was shot in his arm and chest. He had suffered severe wounds, so a local named Htay put Khant Khant Nyein and his mother in an ambulance that would transport them to the hospital. However, they ran into soldiers while trying to leave from the north side of the village, and were shot at. Htay died on the spot after being shot many times in his chest, thigh and pelvis; and Khant Khant Nyein died approximately 15 minutes later. The soldiers made his mother come out of the ambulance and lie down on the ground, and they then proceeded to kick her in the face. They also seized the ambulance.