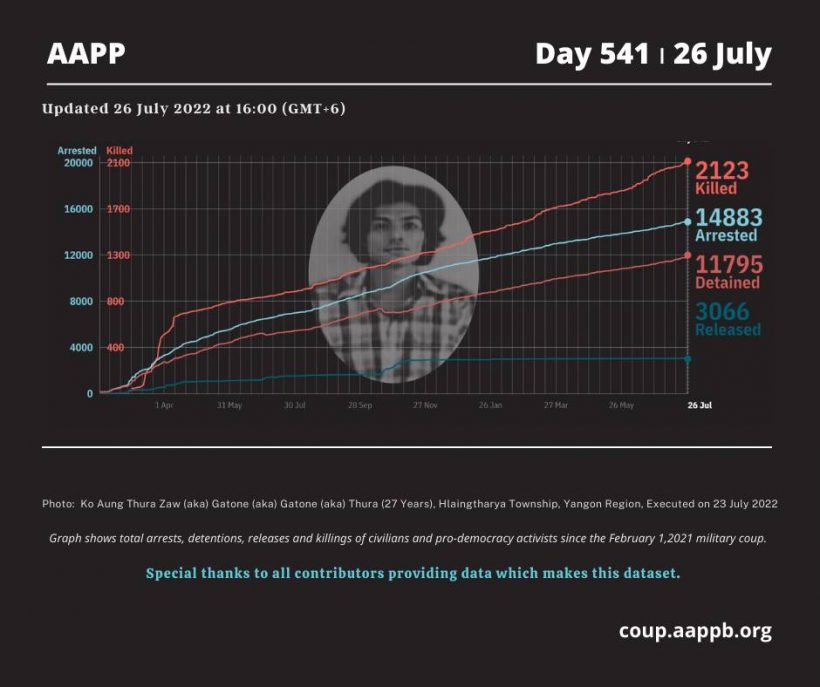 Since the February 1, 2021 military coup and the emergence of the Spring Revolution, a total of  (2123) people, pro-democracy activists and other civilians have been killed through military crackdown following pro-democracy movements. AAPP compiled and documented (3) fallen heroes today. These (3) fallen heroes, from Thayetchaung Township in Tanintharyi Region, Yinmarbin Township and Kawlin Township in Sagaing Region, were killed on previous days, but documented today. This is the number verified by AAPP. The actual number of fatalities is likely much higher. We will continue to update accordingly.

On July 24, 2022, three civilians were arrested by the junta forces in Pakokku Township, Magway Region. At around 8:00 a.m, Zarni Tun from Myit Chay Town, was arrested by Myit Chay-Sabay Road; he was accused of being a member of the People’s Defense Force (PDF). In addition, Thet Zaw Oo (aka Thet Ko), who lives on Pakokku-Yesagyo Road, was arrested for allegedly supporting PDF forces. The third civilian, Zaw Myo Htut, was arrested after his mobile phone was checked on the “Pauk Shwe Pyi Thar” passenger bus at No (6) ward Pakokhu – he was accused of writing and spreading fake news.