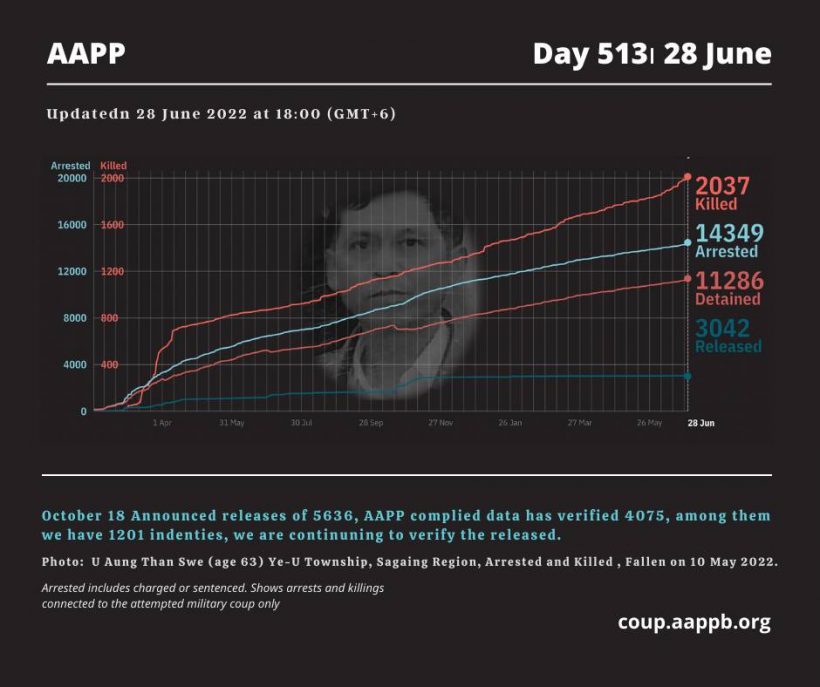 Since the February 1, 2021 military coup and the emergence of the Spring Revolution, a total of  (2037) people, pro-democracy activists and other civilians have been killed through military crackdown following pro-democracy movements. AAPP compiled and documented (5) fallen heroes today. These (5) fallen heroes, from Chaung-U Township and Khin-U Township in Sagaing Region and Myaing Township in Magway Region, were killed on previous days, but documented today. This is the number verified by AAPP. The actual number of fatalities is likely much higher. We will continue to update accordingly.

On June 23 at around 9 pm, a mother and daughter named Pauk and War Moe, living in Kyaung Ywar Ward in Chaung-U Town, Sagaing Region, were killed on the spot when a junta artillery shell landed on their house. The armed wing of the junta stationed at Chang-U Town fired artillery shells into Kyaung Ywar Ward and Anout Ma Oak Ward, located to the south of Khin-U town that night.

On June 22, Lu Min, a ninth grade student who withdrew from school because he did not want to participate in the junta’s education system was shot dead by a military junta column, in a field near Kan Thit Village, Khin-U Township, Sagaing Region. The killing occurred following a clash near Kan Thit Village, when a military column came to support junta troops, and then shot Lu Min on-sight.