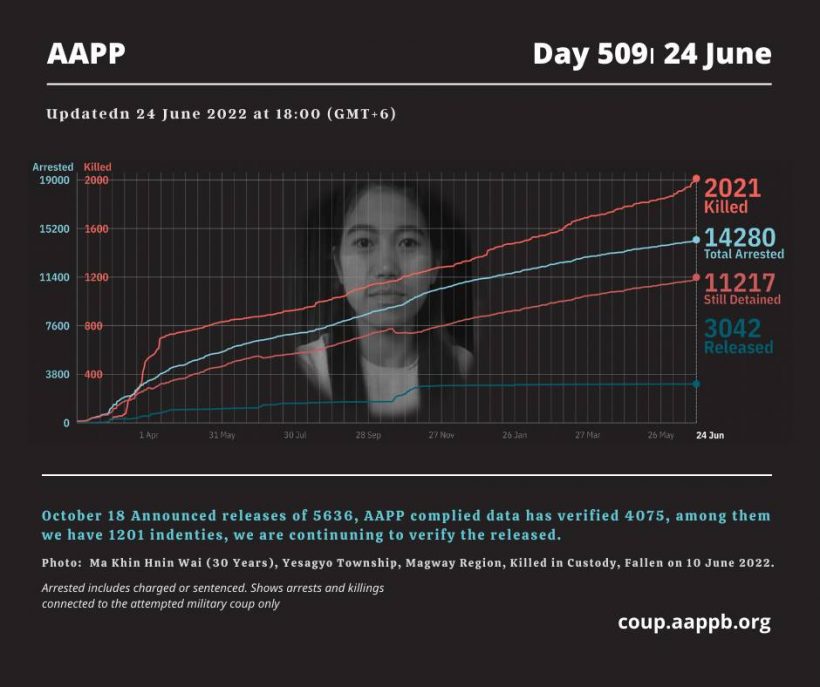 Since the February 1, 2021 military coup and the emergence of the Spring Revolution, a total of  (2021) people, pro-democracy activists and other civilians have been killed through military crackdown following pro-democracy movements. AAPP compiled and documented (10) fallen heroes today. These (10) fallen heroes, from Tamu Township and Salingyi Township in Sagaing Region, Pwintbyu Township in Magway Region, Launglon Township in Tanintharyi Region and Mohnyin Township in Kachin State, were killed on previous days, but documented today. This is the number verified by AAPP. The actual number of fatalities is likely much higher. We will continue to update accordingly.

At around 4 PM on June 23, the armed wing of the junta raided and burned down Yan Linn Phai Village, Tamu Township, Sagaing Region. They then arrested and killed 3 locals named Hou Len Mang and Pao Tin Thang from Ran Linn Phai Village, and Sei Kho Thang from Khun Moon Nwan Village. Hou Len Mang and Pao Tin Thang were arrested whilst hiding inside a school after hearing guns fired outside, and Sei Kho Thang was arrested at his house.

On the night of June 21, the armed wing of the junta, including Pyu Saw Htee, entered Wa Byaw Village, Launglon Township, Tanintharyi Region, and raided 3 houses while firing their guns. They arrested 49-year old Khin Mar Cho (aka Mal Cho), who was tortured and killed. Her body was disposed of and left in front of her house on June 22, at around 1:30 AM. According to a local, Mal Cho had suffered one gunshot wound and other wounds indicating she had been beaten and slashed.