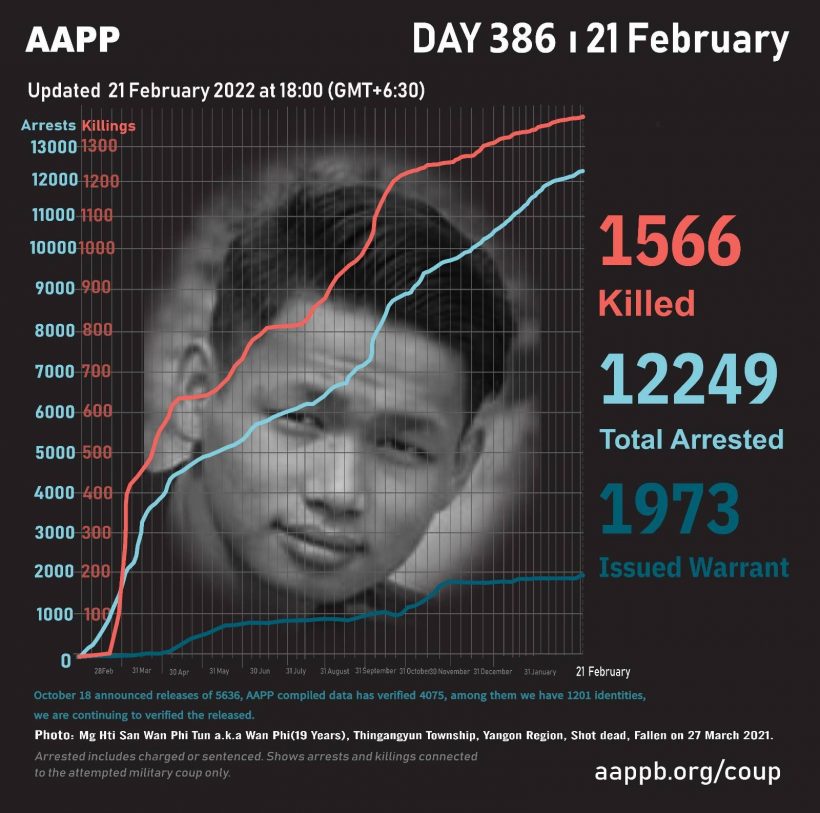 As of February 21, (1566) people are now confirmed killed by this junta coup. AAPP compiled and documented (6) fallen heroes today. These (6) fallen heroes from Kantbalu Township in Sagaing Region were killed on February 19 and documented today. This is the number verified by AAPP. The actual number of fatalities is likely much higher. We will continue adding as and when.

In the morning of February 19, junta soldiers and Pyu Saw Htee personnel raided Pay Lae Village, in Kantbalu Township, Sagaing Region, and attacked with artillery shells. As a result, 3 family members died from the attacks, while hiding inside a house at the south of the village. The victims are Than Nwe, aged around 40 years old, her son Chan Nyein Aung, aged 27 years old, and her daughter Phue Phue, aged 22 years old. A civilian named Chit Kaung, from another village, also died in the attack. Further shootings of junta forces also resulted in the death of Thein Zaw, aged 50 years old, primary income provider of the 3 family members, and a grade-8 student, Hein Ko.

On February 17, at 11 pm, Shwe Yoon Eain, the two-year-old daughter of detainee Nyein Ei Phyo Kyaw, died in Thandwe Prison where she was being held with her mother. Shwe Yoon Eain was a child with poor health who had undergone surgery before. She died of poor health worsened by prison conditions. Her mother, Nyein Ei Phyo Kyaw, was detained under the Counter-Terrorism Law in Thandwe Township, Rakhine State.