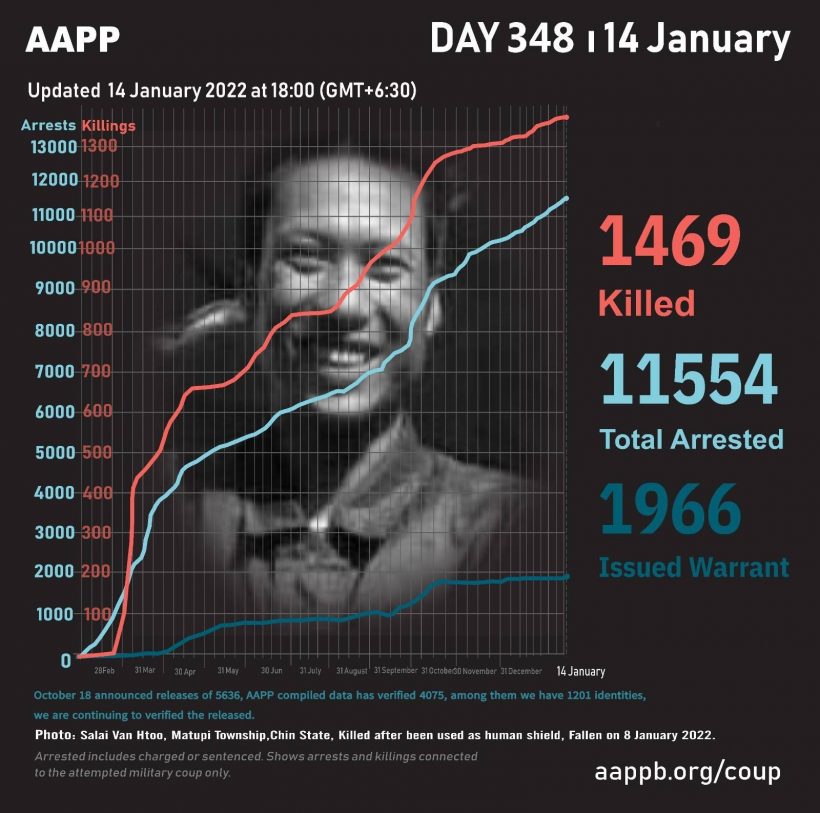 From September 15 onwards, AAPP will not publish a briefing, detention, and fatality list on Saturday’s and Sunday’s.

As of January 14, (1469) people are now confirmed killed by this junta coup. AAPP compiled and documented (3) fallen heroes today. These (3) fallen heroes from Aung Myay Tharzan Township in Mandalay Region and Minkin Township and Taze Township in Sagaing Region were killed on previous days and documented today. This is the number verified by AAPP. The actual number of fatalities is likely much higher. We will continue adding as and when.

On the morning of January 13, Thandar Hlaing aged 15 years old was shot dead in the chest and two men were injured, due to an unprovoked shooting by the junta. This happened after a hand-made grenade exploded near Nyaung Kwal Ward Administration Office in Aung Myay Tharzan Township, Mandalay Region.

On January 12, soldiers from the armed wing of the Junta raided Zana Byinn Village in Sagaing Region’s Minkin Township and Aung Kyaw Hein, aged eight years old, was shot dead. It has been reported that Aung Kyaw Hein was killed because he asked the junta soldiers to give the villagers’ their mobile phones back, when they confiscated them.

On the morning of January 10, Win Naung, who is a villager in Sein Nan Village in Sagaing Region’s Taze Township, was shot and arrested when a procession of military junta arrived at the entrance of the village. Win Naung, who was injured from a gunshot, died due to torture during questioning.