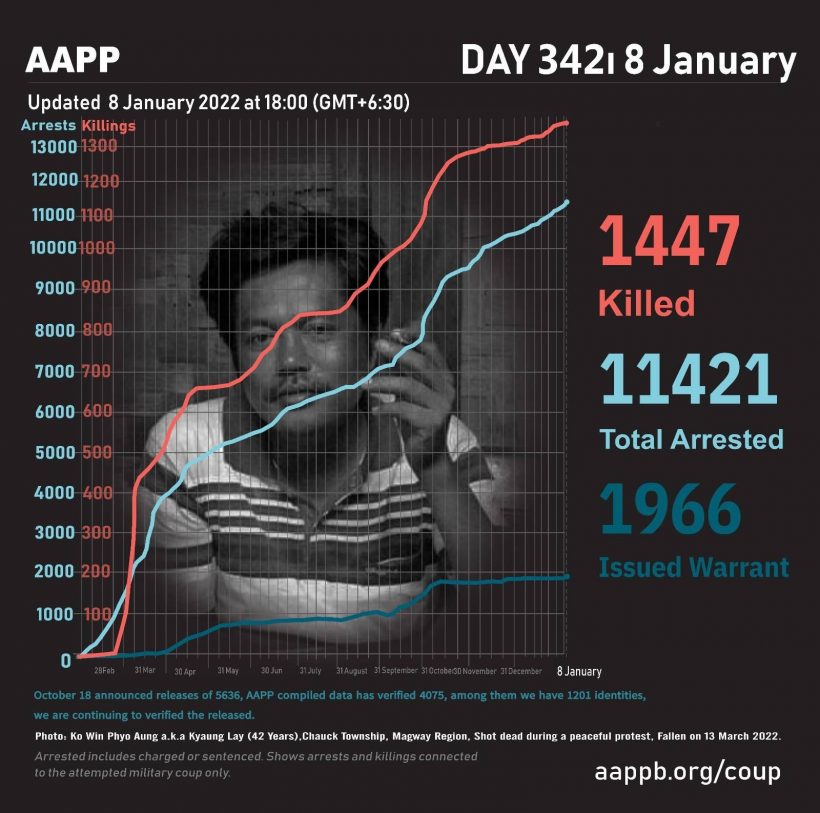 As of January 8, (1447) people are now confirmed killed by this junta coup. AAPP compiled and documented (3) fallen heroes today. These (3) fallen heroes from Thayetchoung Township in Tanintharyi Region were killed on January 7 and documented today. This is the number verified by AAPP. The actual number of fatalities is likely much higher. We will continue adding as and when.

On January 4, Min Khant Zaw, a first-year student at Sagaing Education College, and Aung Pyae Phyo, a first-year student of Mandalay University of Foreign Language (MUFL), were shot and arrested when they were leaving East Taze Town in Sagaing Region. Following their arrest, they were tortured by the armed wing of the Junta. Min Khant Zaw was beaten and his hair was pulled out. Aung Pyae Phyo was also brutally tortured, after being shot in the thigh during his arrest. In addition, their necks were tied with an iron chain and they were forced to shout “we are Minkin PDF” and, “the uprising must fail”.

On January 7 at around 10 am, villagers living in Kin Shae Village in Thayetchoung Township, Tanintharyi Region, ran away, when the armed wing of the Junta opened fire and entered the village. Khant Zin Htwe aged 14 years old, Ye Zaw Htike aged 17 years old, and Aung Thet Phyo, were shot dead while working as masons in the village. Many other locals were injured in the shooting.