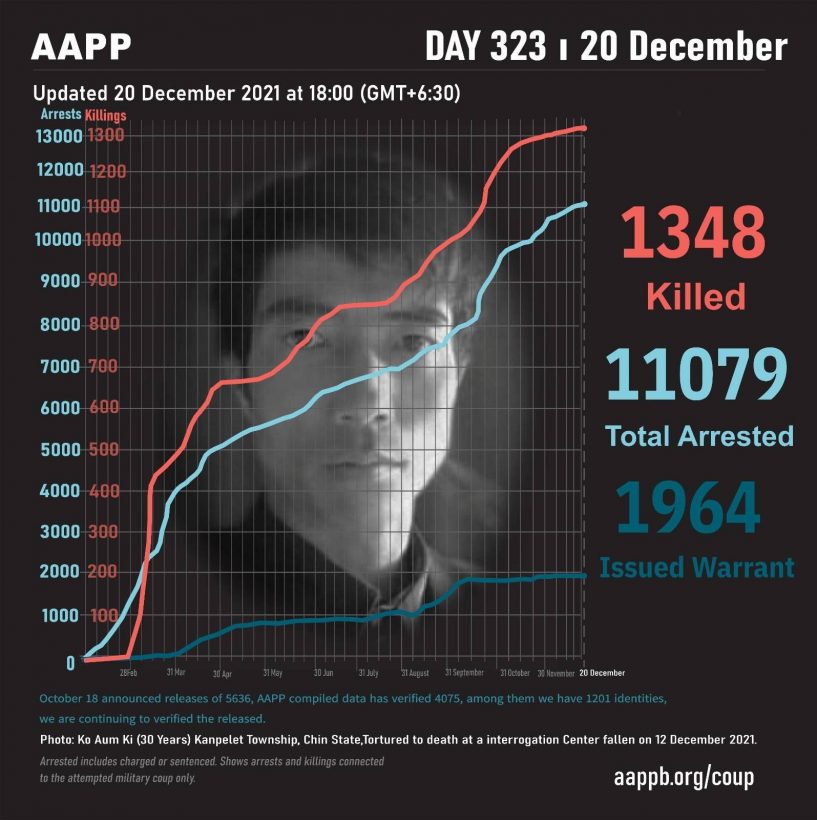 As of December 20, (1348) people are now confirmed killed by this junta coup. AAPP compiled and documented (2) fallen heroes today. These (2) fallen heroes from MinkinTownship in Sagaing Region were killed on December 14 and documented today. This is the number verified by AAPP. The actual number of fatalities is likely much higher. We will continue adding as and when.

On the night of December 16, around 50 soldiers from the armed wing of the Junta, raided Kanyin Dai Village in Hpyu Township, Bago Region. Han Htay, father of Htet Myat Soe, and Phyo Thet Oo, elder brother of Aung Phyo Thu, were arrested as hostages, when they did not find Htet Myat Soe and Aung Phyo Thu. Htet Myat Soe and Aung Phyo Thu are accused of being in association with the local People’s Defense Force (PDF). In addition, on December 18, at around 10 am, they raided the same village, and arrested Phoe Kaung Kin, 17 years old, and in grade 10, as a hostage. Phoe Kaung Kin is the youngest brother of Aung Phyo Thu.

Doctor Than Ngwe, 72 years old, who is an NLD member and MP of No.2 constituency of Taunggyi Township, Shan State Hluttaw, was arrested on December 17 at 11 pm, at her home. Doctor Than Ngwe was accused of supporting the Civil Disobedience Movement (CDM).