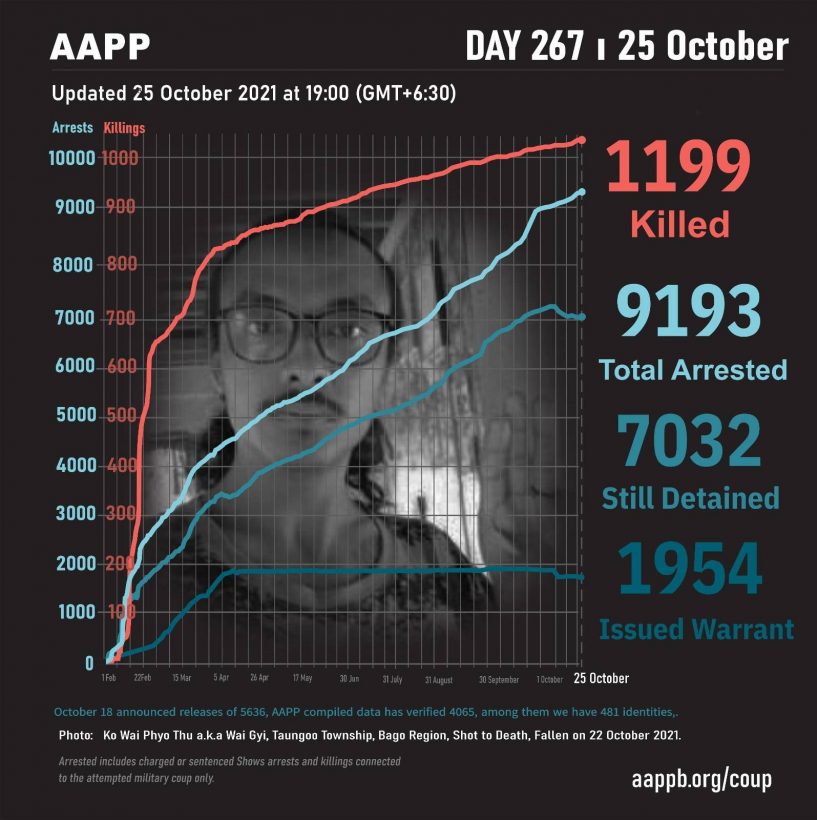 On October 18, the junta announced they would release 1316 people who had been sentenced and 4320 people who were facing trial, a total of 5636. According to AAPP documentation as of October 25, 4065 were released, yet 118 out of 4065 have been re-arrested. The exact identities and total figure remains to be verified, but we will continue to confirm the recently released.

On October 24 around 9 am, Mu Lwan, a 60-year-old, was killed when artillery shells struck his head, and five civilians including two children were injured. LIB 422 based in Mobye Town, Hpei Hkon Township in Shan State fired the artillery shells unprovoked, into the wards of Mobye Town.

On the evening of October 24 at Homalin Township in Sagaing Region, terrorist junta troops raided a home of protest leader Kyaw Win Sein who was evading arrest and shot dead his sister-in-law May Hnin Aye. May Hnin Aye was a teacher involved in the Civil Disobedience Movement (CDM).

On October 15, Naing Htoo Lwin, ‌a medical student of University of Medicine 2 of Yangon, who was serving in the medical department of the Chin National Army, was shot dead by junta troops after he was detained in Falam Township, Chin State. The body of Naing Htoo Lwin was found at Lone Pi Ward on October 23.