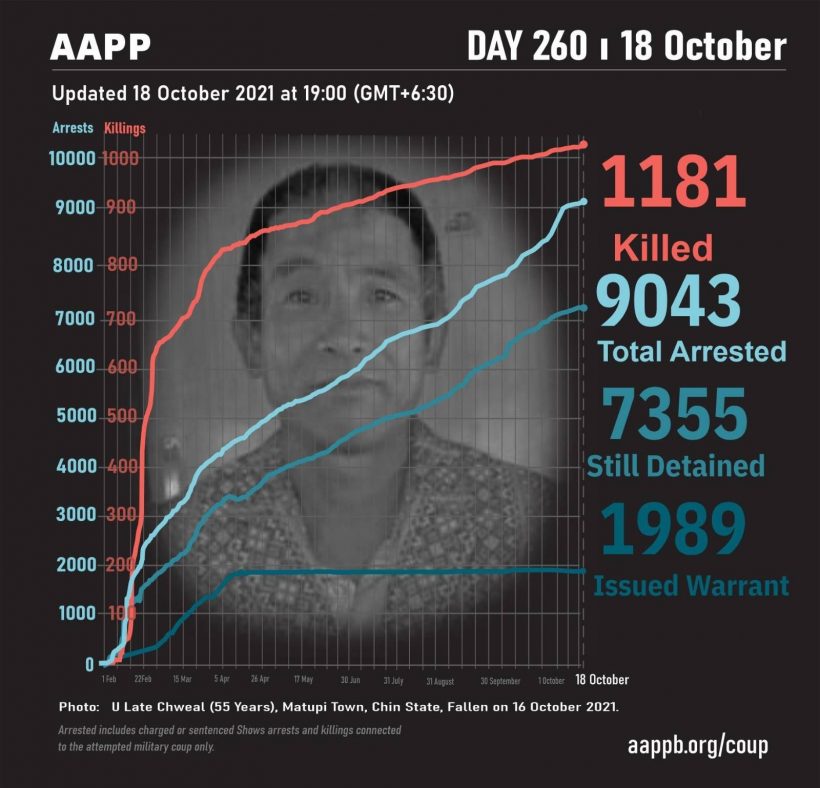 Today’s announcement by the junta they would release prisoners must not be met with applause. It is a tactic of the junta to stop international condemnation. These releases will not end the coup. State Counsellor Daw Aung San Suu Kyi and President U Win Myint and all political prisoners must be unconditionally released, and the democratically elected leaders re-installed to their positions. Action must be taken against those who committed arbitrary arrests and torture. Moreover, the junta must take full responsibility as perpetrators, apologize and institute reparations for those arbitrarily detained and physically and mentally tortured.

As of October 18, (1181) people are now confirmed killed by this junta coup. AAPP compiled and documented (3) fallen heroes today. These (3) fallen heroes from Khin-u Township in Sagaing Region and Matupi Township in Chin State were killed on previous days and documented today. This is the number verified by AAPP. The actual number of fatalities is likely much higher. We will continue adding as and when.

In the early morning of October 16, Myo Swe, living in Shweku Talsu Village in Sagaing Region’s Khin-u Township, was arrested by terrorist junta soldiers and armed Pyu Saw Htee members. Myo Swe was taken to Pyin Htaung Village where the junta were stationed and was tortured the whole day. He was then shot dead the same day, at around 10 pm.

A six year old girl was killed due to an artillery shell explosion in a hut, on the afternoon of October 16 at Matupi Township in Chin State. The artillery shell was fired by the junta troops. In addition to this, Ling Choi died whilst going to a farm when he stepped on a landmine set by terrorist junta troops, on October 16.