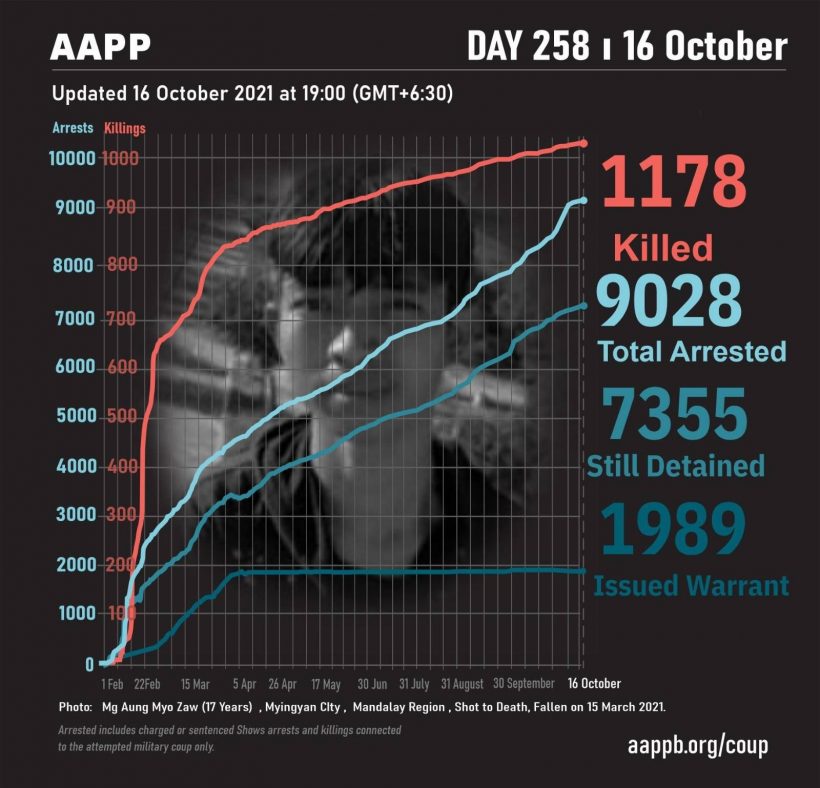 As of October 16, (1178) people are now confirmed killed by this junta coup. Today there were no confirmed fallen heroes. This is the number verified by AAPP, the actual number of fatalities is likely much higher. We will continue adding as and when.

Three youths named Julie, Yoon Lei Nandar and Nan Khan Phoo Myat, living in Kyaing Ton Township, Shan State, were arrested on February 15 for protesting against the military coup. On October 15, the three students were sentenced to 3 years imprisonment under Section 505(a) of the Penal Code by the special court set up inside prison.

Htay Htay Wai, living in Sagaing Town, Sagaing Region, who is involved in the Civil Disobedience Movement (CDM), was sentenced to 2 years imprisonment under Section 25 of the Natural Disaster Management Law on October 15. Htay Htay Wai had been involved in other anti-dictatorship movements as well as the CDM, and was arrested at home on the night of April 12.

On the morning of October 14, terrorist junta troops raided Seik Khun Village in Sagaing Region’s Shwebo Township and arrested Aye Min Oo, a doctor involved in the CDM and eight other locals, who were accused of being in the PDF.