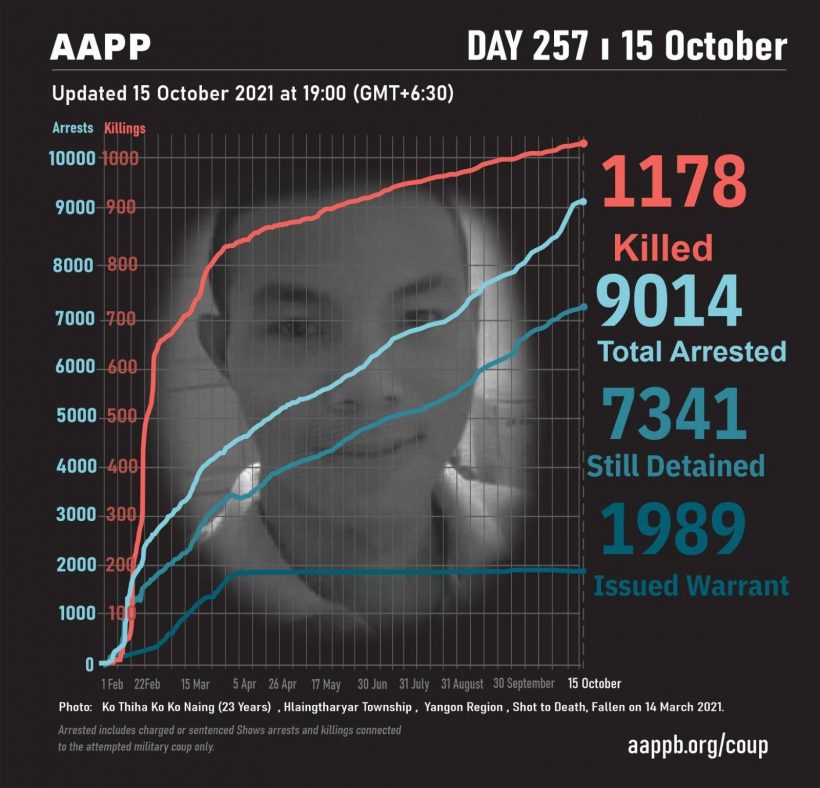 As of October 15, (1178) people are now confirmed killed by this junta coup. AAPP compiled and documented (7) fallen heroes today. These (7) fallen heroes from Tabayin Township, Minkin Township and Chaung-u Township in Sagaing Region were killed on previous days and documented today. This is the number verified by AAPP. The actual number of fatalities is likely much higher. We will continue adding as and when.

Five locals from Long Pyae Village in Sagaing Region’s Minkin Township were shot dead by junta troops by the outskirts of the village on October 13 at around 10 am. Locals from that village ran to the outskirts out of fear when the terrorist troops raided Long Pyae Village on the morning of October 13. It was when junta troops left the village, they shot at the five villagers. These five were named Min Thant, Po, Thar Swe, Swe Hlaing Oo, and Chat Pyar who suffered from mental illness. In addition to this, Than Naing, living in Kin Mon Taw Village in Sagaing Region’s Chaung-u Township, was shot dead by the Pyu Saw Htee on October 12, whilst Than Naing was on his way to pick up a logger who would cut a tree at his home.

Min Htet Kyaw, a 16-year-old, and Hnin Pwint Madi, a 17-year-old, who are living in Mon State’s Mudon Township, were arrested in their homes by the terrorist junta’s soldiers on the night of October 13.