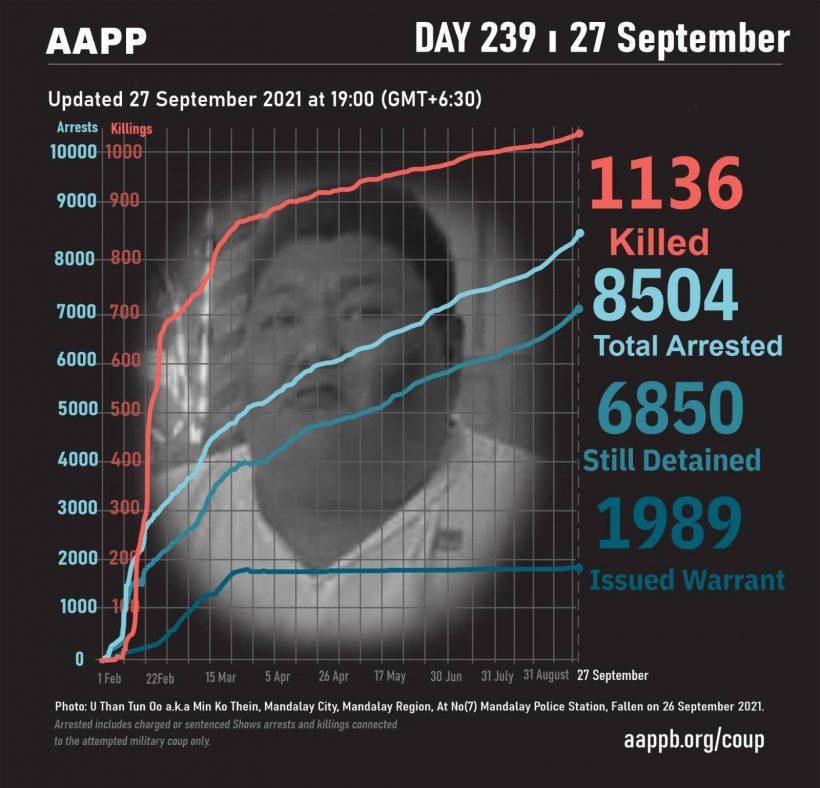 As of September 27, (1136) people are now confirmed killed by this junta coup. AAPP compiled and documented (11) fallen heroes today. These (11) fallen heroes from Aung Myay Tharzan Township in Mandalay Region, Dimawso Township in Kayah State, Kalay Township, Khin-u Township and Yinmabin Township in Sagaing Region were killed on previous days and documented today. This is the number verified by AAPP. The actual number of fatalities is likely much higher. We will continue adding as and when.

On September 25, the terrorist junta came to the house of Than Tun Oo a.k.a Min Ko Thein a.k.a Fatty, living in Aung Myay Tharzan Township in Mandalay Region to arrest him. When telling the NLD party member and charity activist to kneel down, he responded he was not able to do so because of his condition. June troops then shot his knee, assaulted his face and head, and took him away. On September 26, his family was informed that he died.

While Kyi Kyaw, a 70-year-old was at home in Kone Thar Village in Kayah State’s Dimawso Township on September 26,  terrorist junta troops arrived and shot him dead in the chest.

On September 26, terrorist junta troops stationed in a high school in Tharsi Sanpya Village in Sagaing Region’s Kalay Township, arrested Zaw Myo Htut, a policeman involved in the Civil Disobedience Movement (CDM). Also arrested was local villager Than Htike Aung. The junta took both to the cemetery and shot them dead.

On the morning of September 26, terrorist junta troops raided Hmantaw Village in Sagaing Region’s Khin-u Township and shot dead two villagers, named Soe Moe Aung and Myo Myint Aung. In addition to this, they shot dead a medical officer who was evading arrest because of involvement in CDM.