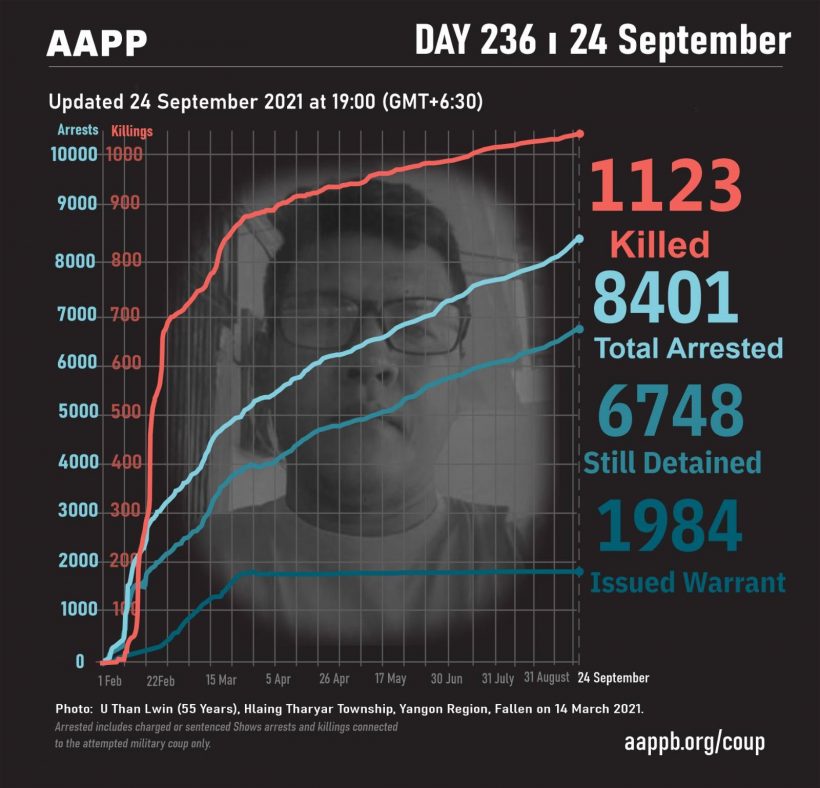 As of September 24, (1123) people are now confirmed killed by this junta coup. AAPP compiled and documented (2) fallen heroes today. These (2) fallen heroes from Kalay Township in Sagaing Region and Mandalay City in Mandalay Region were killed on previous days and documented today. This is the number verified by AAPP. The actual number of fatalities is likely much higher. We will continue adding as and when.

On September 21, Ba Htaw was shot dead while he was running away in fear, when the terrorist junta soldiers entered Myot Gyi Kone Village in Sagaing Region’s Kalay Township.

Pauk Gyi, living in Sein Pan Ward in Mandalay, was arrested and taken by the junta soldiers and Pyu Saw Htee militia troops, at midnight on September 23, due to a report by a junta informer. Pauk Gyi was killed on the embankment of Sein Pan. The body was found with a gunshot wound to his head and stab wounds on his neck.

On September 23 at around 10 pm, Sithu Kaung Myat, a political activist from Bago City in Bago Region, was injured when police shot him whilst arresting him at home. In addition to this, his 50-year-old mother, who is reportedly in poor health, was arrested and taken from their home.