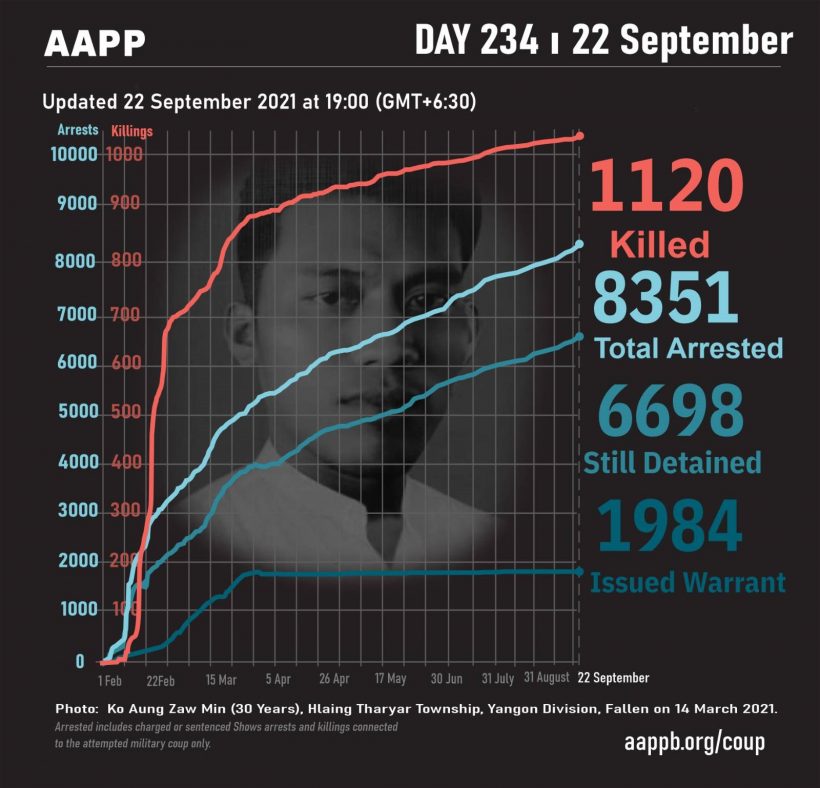 As of September 22, (1120) people are now confirmed killed by this junta coup. AAPP compiled and documented (6) fallen heroes today. These (6) fallen heroes from Kalay Township in Sagaing Region and  Nahtogyi Township in Mandalay Region were killed on previous days and documented today. This is the number verified by AAPP. The actual number of fatalities is likely much higher. We will continue adding as and when.

Kyaw Min Oo, 40 years old from Sagaing Region’s Kalay Township, was tortured to death during interrogation, after he was arrested on September 14. On September 18, his family was informed that he had died. His body was not returned to his family by the terrorist junta.

Around midnight on September 20, terrorist junta soldiers raided Shaw Phyu (Middle) Village in Nahtogyi Township in Mandalay Region, by continuously opening fire. The home of NLD supporters was shot at during the raid, and five family members, including a one and half year old child, were shot. Four of five were shot dead on the spot. The one and half year old child died, due to a thigh injury, when he arrived at Mandalay General Hospital. These five family members are Bo Khin, 76 years old, Than, 75 years old, Maung Tun, 50 years old, Maw Htay, 30 years old and Zwe Htet Maw, one and a half years old.