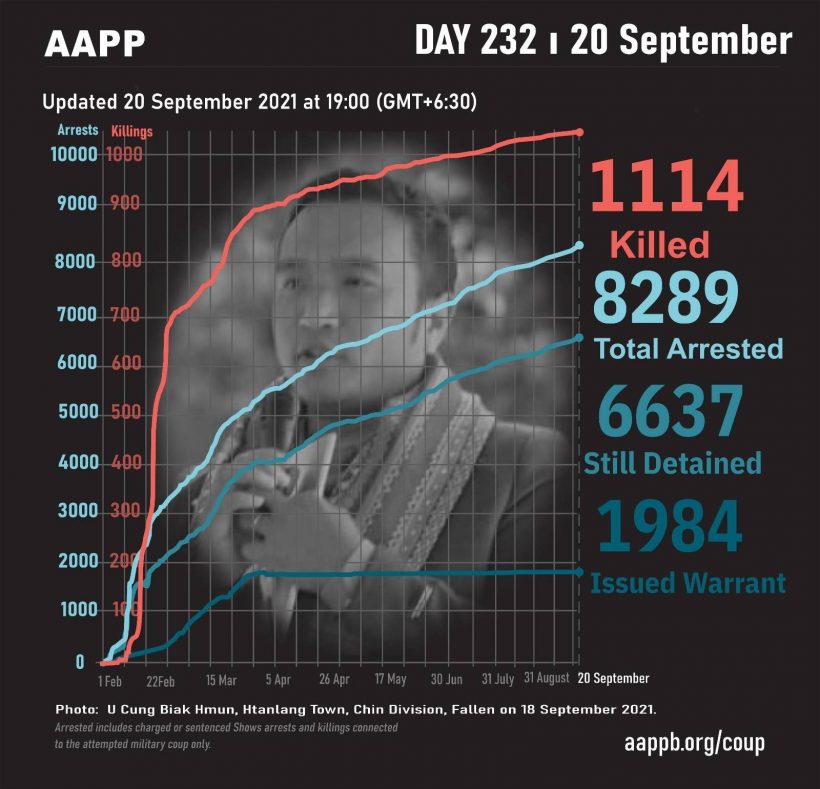 On the evening of September 18, Pastor Cung Biak Hmun from Thantlang Centenary Baptist Church was shot dead while going to put out a fire caused by the junta’s artillery shells, in Htantalang Town, Chin State. In addition to this, terrorist junta troops took Pastor Cung Biak Hmun’s wrist watch and phone and cut off his finger and took his wedding ring.

Soe Min Oo a.k.a Paw Kyaung was shot dead in his temple, when the terrorist junta troops raided Sipin Gyi / Let Pan Khone Village on September 18 in Sagaing Region’s Kalay Township due to a killed junta informer. In addition to this, a man, whose name is still being confirmed, was shot dead while driving into the village.

On September 17 around 9 pm, Aung Than Zaw, who is a primary school teacher living in Myo Lulin Village in Magway Region’s Myothit Township, and a 15-year-old boy was stopped, beaten and questioned by junta soldiers who were guarding Myanmar military-owned Telecom Tower in that village while they were going to a petrol station at the top of the village. Then, Aung Than Zaw was shot in his neck at close range and seriously injured. Aung Than Zaw was sent to the Myothit Hospital and died while being transferred to the 1000-bed Hospital in Nay Pyi Taw on the morning of September 18.

On September 17 around 10:30 pm, Kyaw Kyaw from Taungdwingyi Town in Magway Region was arrested while driving his motorbike to see an ill relative, and tortured overnight. On September 18, his family was informed to collect Kyaw Kyaw. When his family came to get him, he was still alive but he was not able to move. Therefore, he was sent to Magway Hospital but died at the hospital on the same day.

Thein Soe Aung, living in Letpadan Township in Bago Region, who was arrested on September 16, died on September 17 due to torture, bruises were found on his body. In Bagon Region’s Monyo Township, the home of a junta appointed village administrator was shot at, and his personal aide was killed, and the junta administrator’s son injured. Approximately 30 locals including Thein Soe Aung and his wife were arrested during this incident.