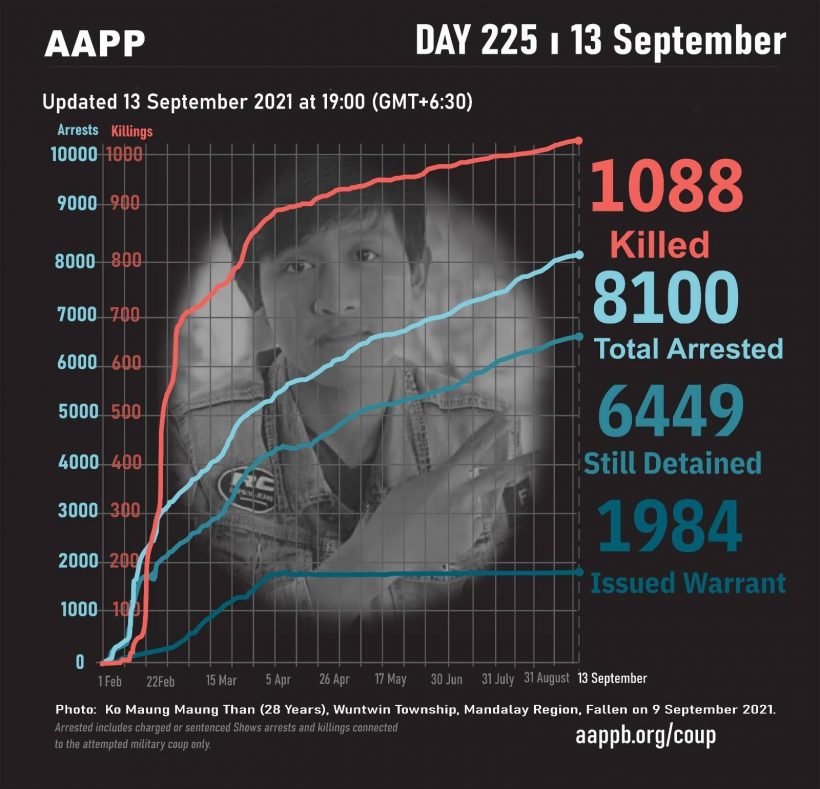 On the morning of September 12, the terrorist junta’s troops raided Htei Hlaw Village in Magway Region’s Gantgaw Township and set fire to the villagers’ homes. The terrorist junta shot local villager Ba Win dead, in his head. Ba Win did not flee along with other villagers.

In addition, on the afternoon of September 12, the terrorist junta troops raided Taung Hlyaung Village in Magway Region’s Taungdwingyi Township and shot two brothers named Myat Soe and Pyi Gyi, when local villagers were running away in fear.

Moreover, the terrorist military arrested the cycle mechanic, Tun Myint Naing on September 11, who was living in Kan Thit Village in Sagaing Region’s Khin-u Township. He was shot dead in his head and back on the roadside, after being questioned and tortured. Tun Myint Naing was at his workshop when he was arrested and taken out of the workshop.

On the night of September 10 at Tamu Township in Sagaing Region, a civilian named Rar Jar was arrested when he ran into junta soldiers who were patrolling the streets, while he was returning home from his friend’s house. On September 11, his body was found by locals and there were gunshot wounds and injuries consistent with torture, on his body.

On the night of September 11 at Yangon’s Region’s North Dagon Township, Aung Ko Lwin died and a woman got injured in her leg and stomach, when the terrorist military followed them with a military vehicle. The terrorist military shot the car driven by Aung Ko Lwin, as he did not stop when they told him to. It is reported that the woman is in serious condition.

Maung Maung Than, living in Mandalay Region’s Wundwin Township, was shot in his neck and back. He died due to an unprovoked shooting by the terrorist troops, whilst he was listening to music at his home, on the night of September 9.