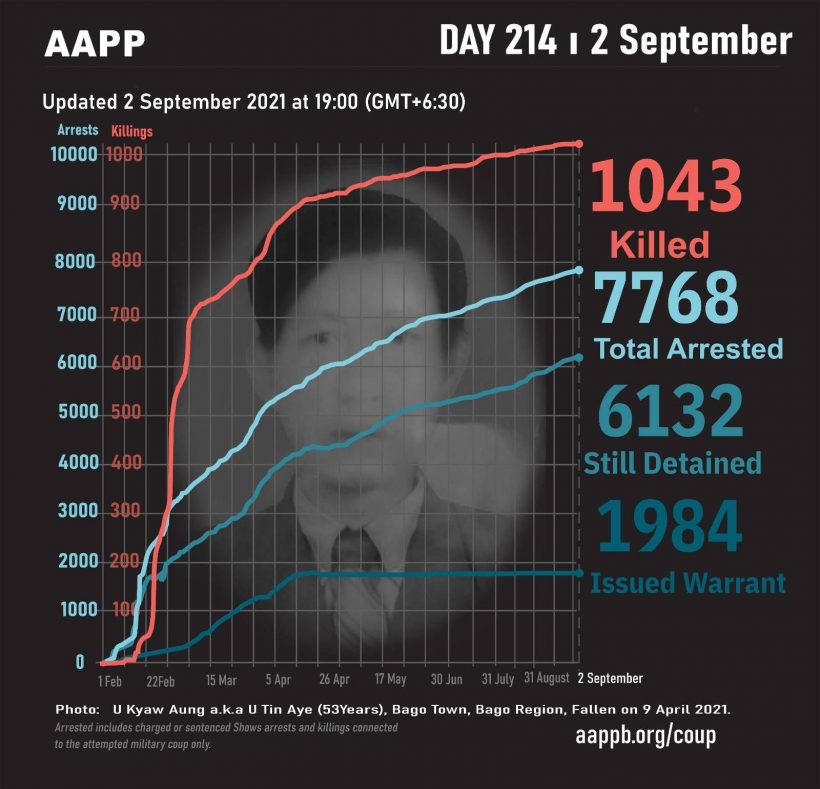 As of September 2, (1043) people are now confirmed killed by this junta coup. AAPP compiled and documented (2) fallen heroes today. These (2) fallen heroes from Paung Township in Mon State and Myitkyina Township in Kachin State were killed on previous days and documented today. This is the number verified by AAPP. The actual number of fatalities is likely much higher. We will continue adding as and when.

Ei Thwe Moe, who is five months pregnant, was shot dead on the spot. Her husband Min Nay Lwin a.k.a Puday was shot in the ear, and seriously injured, by the terrorist junta forces at 10 pm, at Aung Thitsar Aung Myittar Ward in Katike Village Tract in Mon State’s Paung Township. The couple were shot at while returning home, Ei Thwe Moe having picked up her husband who was fishing.

On August 31 at around 3 am, Than Soe Aung, living in Myo Thit Gyi Ward in Myitkyina Township in Kachin State, was shot in the groin by the junta soldiers guarding Myawaddy Bank. Than Soe Aung died after arriving at the hospital. He was shot on his bike, when he was going to remove a fishing net.

Win Mar, the mother of the fallen hero Nyi Nyi Aung Htet Naing who was shot dead while protesting against the dictatorship, was arrested at home as a hostage by the terrorist junta, when they could not find his twin brother, Ko Ko Aung Htet Naing, at home.

On August 31, Khin San Hlaing, NLD’s Pyithu Hluttaw MP for Pale Township in Sagaing Region, was arrested at a home in Yangon Region’s Bahan Township, by the terrorist junta.