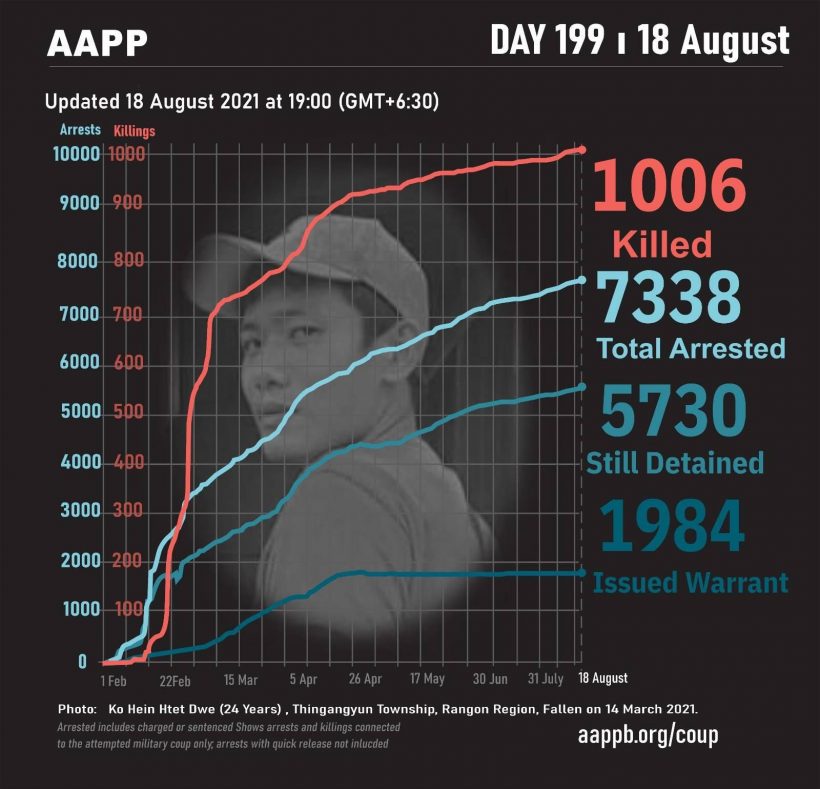 As of 18 August, (1006) people are now confirmed killed by this junta coup. AAPP compiled and documented (7) fallen heroes today. These (7) fallen heroes from Minkin Township and Shwebo Township in Sagaing Region and Pauk Township in Magway Region were killed on previous days and documented today. This is the number verified by AAPP, the actual number of fatalities is likely much higher. We will continue adding as and when.

Terrorist junta’s soldiers who were drunk pointed a gun to the temple of Zaw Myo Myint and shot him dead at close range among people at a port in Minkin Town, Sagaing Region on the evening of August 17. Junta troops beat and then shot Zaw Myo Myint for not wearing a face mask while he was sitting and chewing the betel nut in the port. Zin Mar Win from Min Sar village in Minkin Township who heard the sound of gunshots and witnessed Zaw Myo Myint’s dead body, died on the spot from a heart attack.

Hla Myint Oo, living in Thapyay Yay Village in Magway Region Pauk Township, who had opened a shop, was shot with a tumee (traditional hunting) rifle used by junta troops on the evening of August 13. The junta then set a bomb on an old motorbike in front of his shop.

In addition, junta troops raided Paline, Gonetan and Kanthar Villages in Sagaing Region’s Shwebo Township, then arrested and shot dead a local from Gonetan Village called Nan, on August 12. The incident happened at a school in Paline Village where they had set up camp after they questioned Nan who came past but failed to reply.