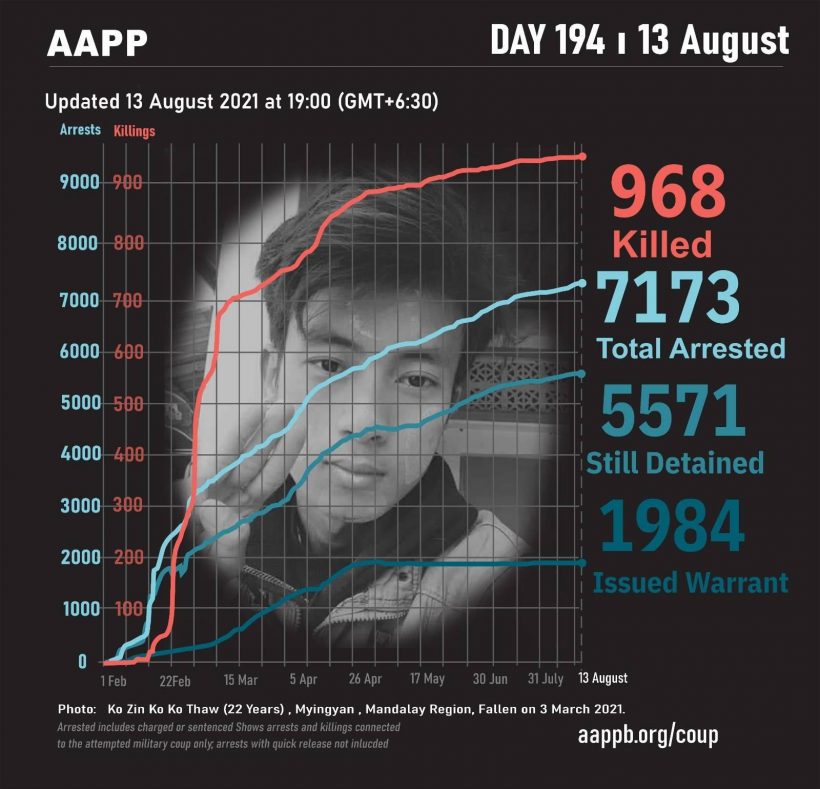 As of 13 August, (968) people are now confirmed killed by this junta coup. AAPP compiled and documented (2) fallen heroes today. These (2) fallen heroes from Myingyan Township in Mandalay Region and Minkin Township in Sagaing Region were killed on previous days and documented today. This is the number verified by AAPP, the actual number of fatalities is likely much higher. We will continue adding as and when.

A young girl around one-years-old was shot in the head and stomach and died on the spot in the morning of August 12 at Myingyan Township in Mandalay Region when the terrorist junta’s soldiers opened fire on three young men on motorbikes near the child’s house. In addition to this, Nyein Chan, father of the child, was shot twice in the arm, and the mother was also shot in the leg.

On August 5, junta soldiers and the Pyu Saw Htee detained five Than Pauk villagers near Obo village in Sagaing Region’s Minkin Township allegedly for being involved in the anti-coup revolution. A 26-year-old was beaten to death, called  Hlaing Wai Oo, right in front of the detained persons at a school in Pan Sat village. Two sons had taken their mother to Yar Village which is close to Pan Sat village because she was suffering from illness. A total of five people including two sons and their mother and two other men were arrested while returning together. Hlaing Wai Oo was killed in front of his mother. A few days later, three of the villagers were released, but nothing has yet been heard about the one remaining villager.

Win Zaw was arrested when terrorist junta troops wearing plain clothes did not find his son when they searched his home in Dawei, Tanitharyi Region on the morning of August 12.

Myint San, MP of Magwe Region Hluttaw in the constituency No. (2) of Pauk Township and also NLD party member, who was charged under Section 505(a) of the Penal Code and had a warrant issued against her, was arrested in Nattalin Town in Bago Region on the night of August 11 by local junta police.