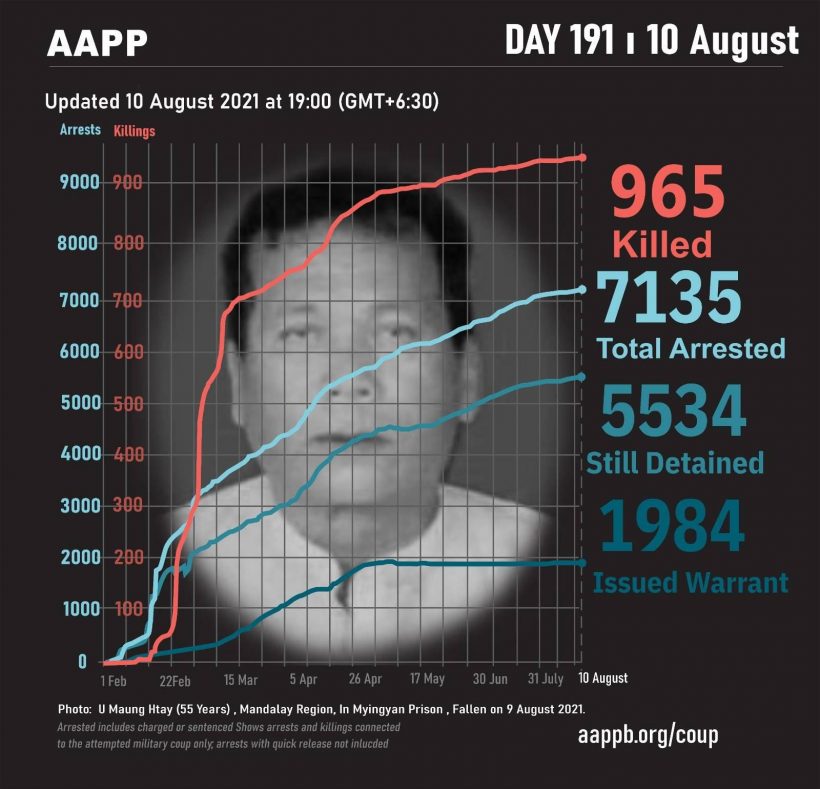 As of 10 August, (965) people are now confirmed killed by this junta coup. AAPP compiled and documented (3) fallen heroes today. (1) from Falam Township in Chin State was killed today and (2) from Myaing Township in Magway Region and Myanaung Township in Ayeyarwady Region were killed on previous days and documented today. This is the number verified by AAPP, the actual number of fatalities is likely much higher. We will continue adding as and when.

60 year-old Pi Ngeih Tling was shot dead in the chest at home in an unprovoked shooting by the terrorist junta’s soldiers on the morning of August 10 at Falam Township in Chin State.

On the afternoon of August 9, three junta police wearing plainclothes entered Pike Thin village and opened fire because a protest leader San Ko from Pike Thin Village escaped from arrest when three junta police tried to arrest him at a COVID-19 checkpoint. Aung Zay Ya, a villager from Pike Thin village in Magway Region’s Myaing Township, was dragged into their car because he was holding a slingshot when he went out of the house to look. When junta police arrived near a pond at the top of the village, they told Aung Zay Ya to get out of the car and told him to run towards the pond. While Aung Zay Ya was running, they shot him from his back. Aung Zay Ya died on the spot from this gunshot injury, according to a local.

A family was informed that San Win from Tha Pyay Kone village in Ayeyarwady Region’s Myanaung Township, who was arrested by Tha Pyay Kone Village Police Station in the morning of August 7 for questioning, died at the hospital at 2 pm that day due to severe injuries. It is reported there were beatings all over his body consistent with torture. Win Tun and Aung Myint Oo from Tha Pyay Kone village were arrested with him and were released the same day. On the morning of August 9, local police Kyaw Kyaw Maung and a person wearing plain clothes came to his family to settle the case for 3 million kyats. It is reported that his family members will not accept this negotiation.