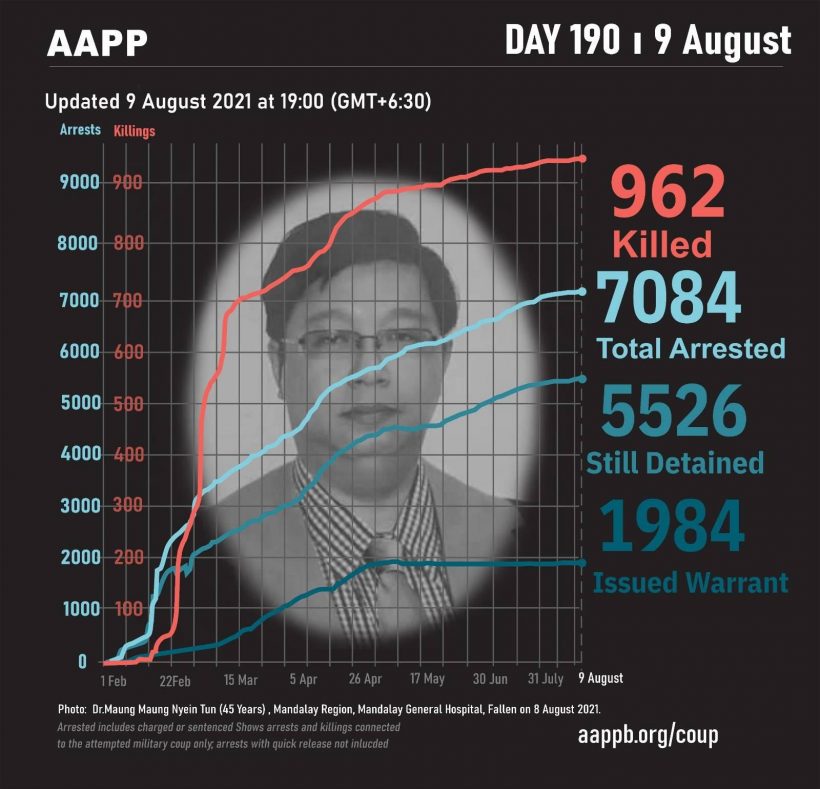 As of 9 August, (962) people are now confirmed killed by this junta coup. AAPP compiled and documented (2) fallen heroes today. (1) from Myingyan Township in Mandalay region died today and (1) from Mandalay died yesterday. This is the number verified by AAPP, the actual number of fatalities is likely much higher. We will continue adding as and when.

Doctor Maung Maung Nyein Tun, lecturer of surgery of University of Medicine of Mandalay, who is involved in the Civil Disobedience Movement (CDM), was arrested on June 13 and sued three counts of charges, died on August 8 at Mandalay General Hospital due to COVID-19. It is reported that he was contracted COVID-19 while detained in the Interrogation Center of Mandalay Nandwin. At first, it is heard that the terrorist junta did not transfer him to the hospital and detained him at the No.9 police station for two weeks. He was transferred to the Mandalay General Hospital when his condition was worse as he did not receive sufficient medical treatment in the cell.

Maung Htay from Kywe Chan Village in Myingyan Township in Mandalay Region, who was arrested on July 10 allegedly because he kept youth protesters and charged under Section 505(a) of the Penal Code, died in Myingyan Prison on August 9. According to a friend of his family member, although the Prisons Department said Maung Htay died due to atherosclerosis and hypertension, his body was covered and only allowed to look at the face.