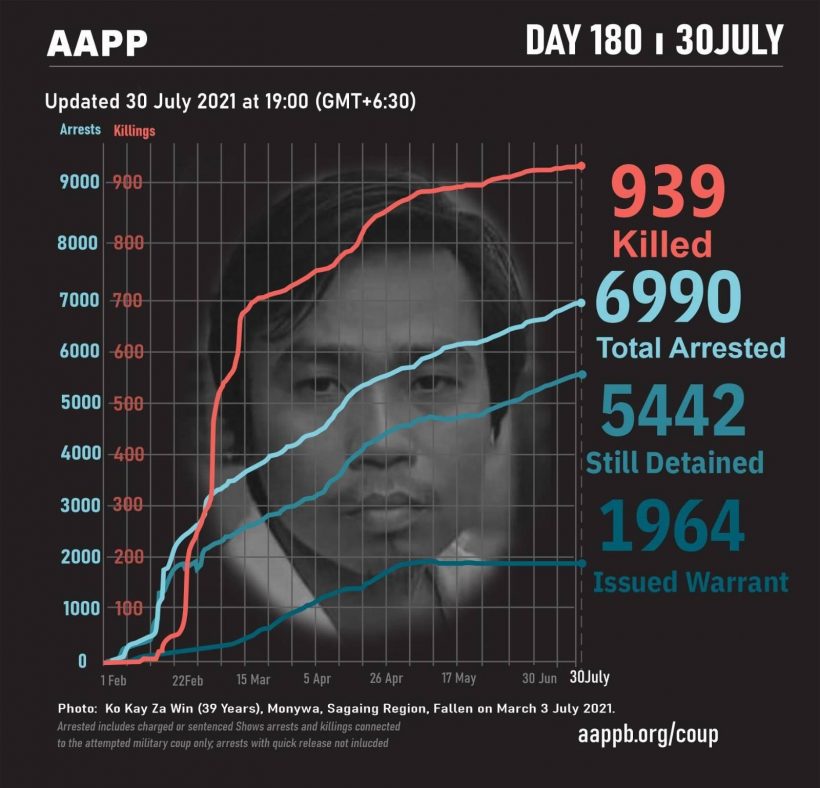 As of 30 July, (939) people are now confirmed killed by this junta coup. AAPP compiled and documented (3) fallen heroes today. These (3) fallen heroes from Pauk Township in Magway Region and Waimaw Township in Kachin State were killed yesterday and documented today. This is the number verified by AAPP, the actual number of fatalities is likely much higher. We will continue adding as and when.

In the evening of July 29, terrorist junta troops wearing plain clothes raided three monasteries (Shwe War Win, Zabu Ay and Thar Yar Wunn Monasteries) which are located inside the Mya Taung Monastery in Mandalay Region’s Maha Aung Myay Township and arrested U Kaw Tha La, an assistant abbot of Shwe War Win Monastery, U Awbartha, an abbot of a Wi Sar Cha Monastery, and two civilians residing and studying at the monastery. According to the junta’s announcement, they arrested Nay La Win a.k.a Noe Si Bu, and accused him of setting explosive substances at Mya Taung Monastery. U Pyin Nyar Thiri Vi Wuntha, an abbot of Shwe War Win Monastery, who contracted COVID-19 and was breathing oxygen, died on the way to the hospital from difficulty breathing hearing the sounds of shouting and beating of a woman in the monastery.

On July 29, two civilians named Min Htike and Naing Min from Thit Nyi Naung village in Magway Region’s Pauk Township died when they stepped on a mine set by junta troops at Kyeenygo Mountain in Pauk Township.