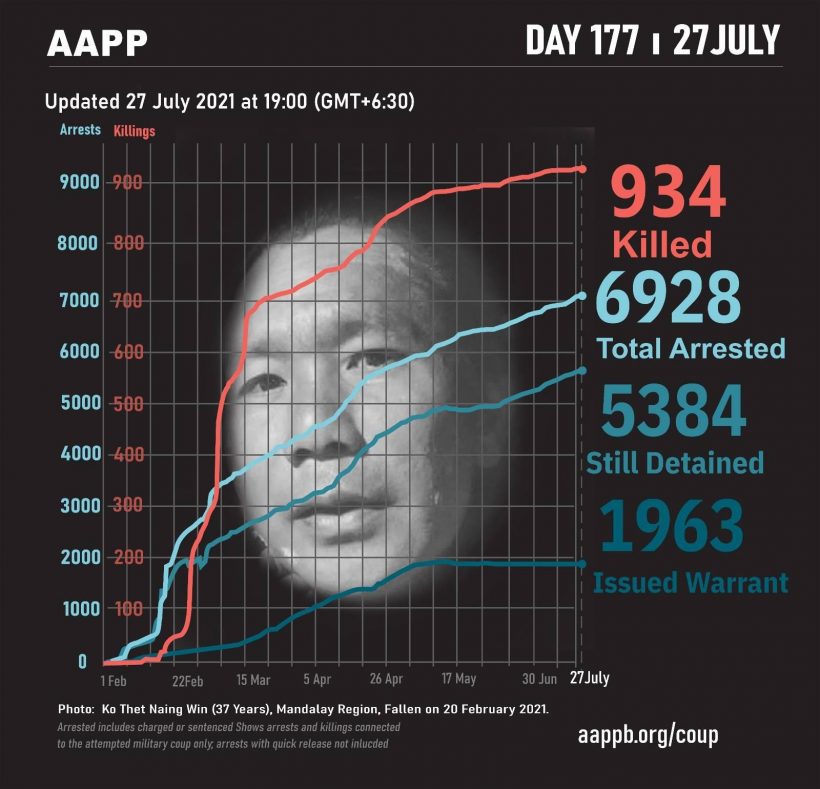 As of 27 July, (934) people are now confirmed killed by this junta coup. Today there were no confirmed fallen heroes. This is the number verified by AAPP, the actual number of fatalities is likely much higher. We will continue adding as and when.

In the evening of July 26, Thein Tun, Shwe Sin Oo, elder brother and wife of political activist Hmone Gyi and his 7-year-old daughter, who are living in Magway Region’s Taungdwingyi Town, were detained as hostages when the junta did not find Hmone Gyi at home. In addition to this, workers from a car workshop at his home were arrested. All detainees including his 7-year-old daughter were released apart from Thein Tun and Shwe Sin Oo who are still detained. In addition to this, five civilians named Mi Zan, Than Tin, Aung Htet Thu, Aung Kyaw Phyo and Aye Ko Than, who are living in Mandalay Region’s Mogok Town, were arrested at their homes for allegedly banging pots on the night of July 26.

Pyae Sone Maung, who is 15 years old, was arrested on July 17 by the terrorist junta for questioning in alleged relation to a bomb blast at MyTel Office in Lashio Town in Myanmar. Since then, family has not been able to contact him.