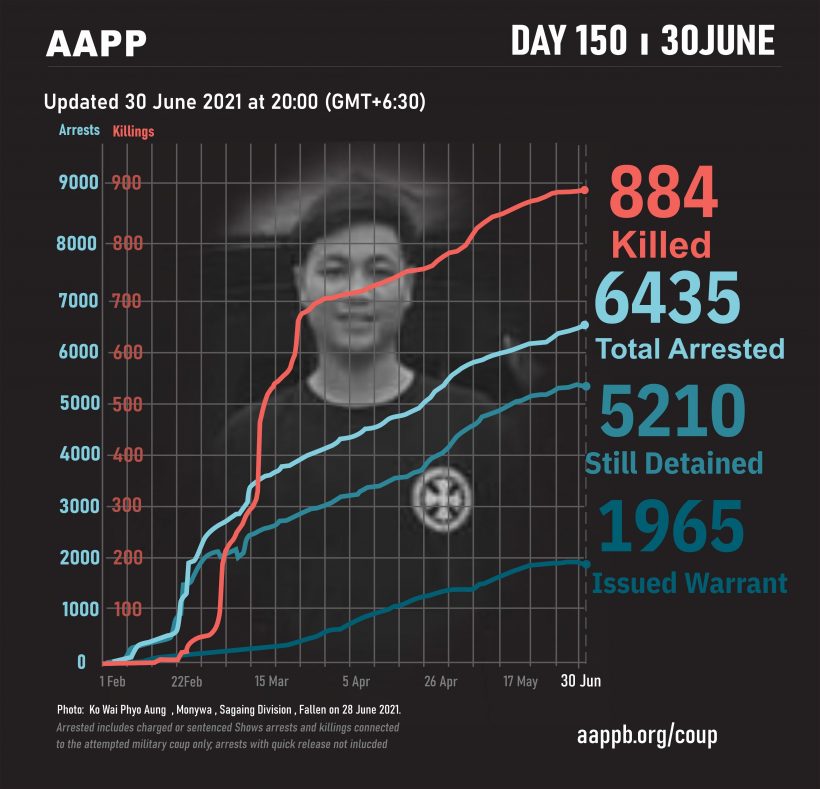 As of 30 June, (884) people are now confirmed killed by this junta coup. AAPP compiled and documented (1) fallen hero today. This (1) fallen hero from Pyigyidagun Township in Mandalay Region was killed on a previous day and documented today. This is the number verified by AAPP, the actual number of fatalities is likely much higher. We will continue adding as and when.

The terrorist junta announced that on June 30, they will release over 2000 students and civilians who were arbitrarily detained and charged in prisons across the country after the coup. The names of today’s released detainees have not been immediately available to compile, we will continue to add the released names when confirmed.

In the morning of June 28, a civilian named Wai Phyo Aung was shot dead on spot by the terrorist junta when he went to look at a dispute over land in Pyigyidagun Township, Mandalay Region. His body was taken by the junta and his family was only shown a photo.

On the morning of June 29 in Yangon Region’s North Okkalapa Township, eight family members including lawyer Wai Wai Khaing were arrested when the terrorists did not find his son, a judge who is involved in the Civil Disobedience Movement (CDM), when they came and searched to arrest him at home.  Police Sub-Lieutenant Jorny a.k.a Thura from Chanayethazan Township Police Station in Mandalay Region, who was arrested for his involvement in CDM, was sentenced to three years imprisonment on June 7.