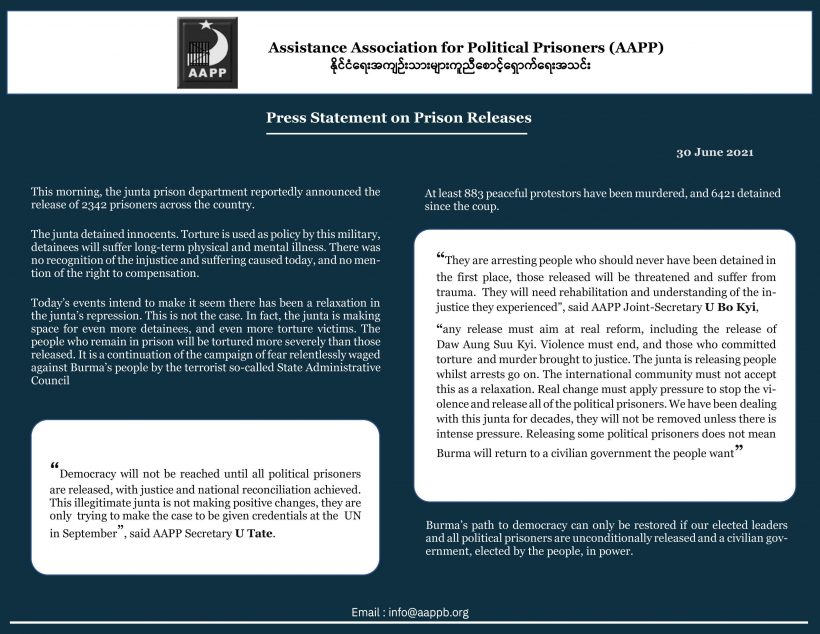 This morning, the junta prison department reportedly announced the release of 2342 prisoners across the country.

The junta detained innocents. Torture is used as policy by this military, detainees will suffer long-term physical and mental illness. There was no recognition of the injustice and suffering caused today, and no mention of the right to compensation.

Today’s events intend to make it seem there has been a relaxation in the junta’s repression. This is not the case. In fact, the junta is planning to detain and torture even more civilians. The people who remain in prison will be tortured more severely than those released. It is a continuation of the campaign of fear relentlessly waged against Burma’s people by the terrorist so-called State Administrative Council.

At least 883 peaceful protestors have been murdered, and 6421 detained since the coup. “Democracy will not be reached until all political prisoners are released, with justice and national reconciliation achieved. This illegitimate junta is not making positive changes, they are only trying to make the case to be given credentials at the UN in September”, said AAPP Secretary U Tate.

“They are arresting people who should never have been detained in the first place, those released will be threatened and suffer from trauma. They will need rehabilitation and understanding of the injustice they experienced”, said AAPP Joint-Secretary U Bo Kyi, “any release must aim at real reform, including the release of Daw Aung Suu Kyi. Violence must end, and those who committed torture and murder brought to justice. The junta is releasing people whilst arrests go on. The international community must not accept this as a relaxation. Real change must apply pressure to stop the violence and release all of the political prisoners. We have been dealing with this junta for decades, they will not be removed unless there is intense pressure. Releasing some political prisoners does not mean Burma will return to a civilian government the people want”

Burma’s path to democracy can only be restored if our elected leaders and all political prisoners are unconditionally released and a civilian government, elected by the people, in power.