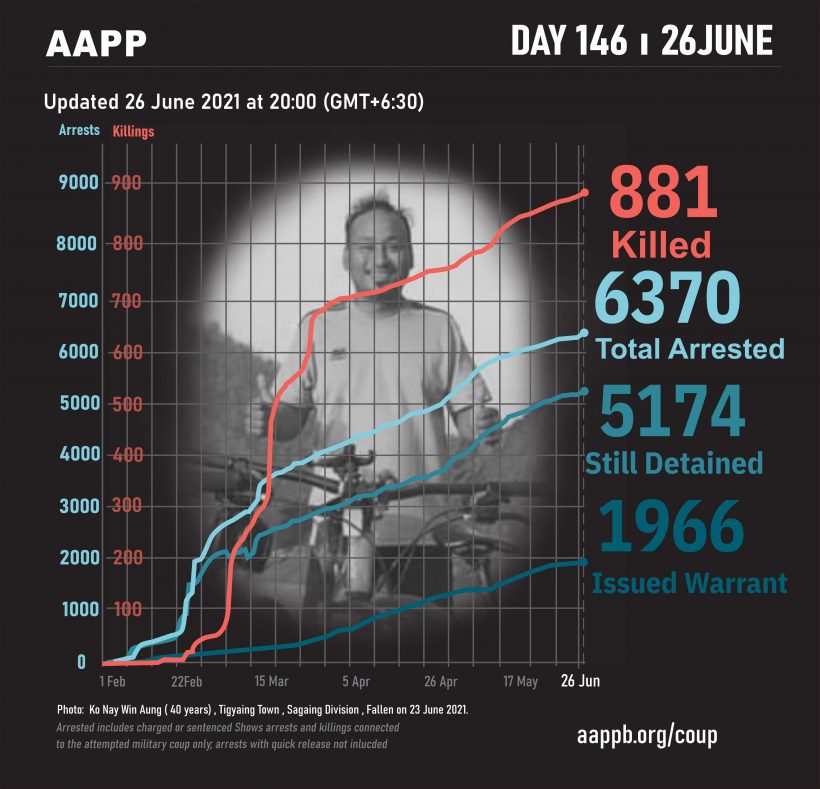 As of 26 June, (881) people are now confirmed killed by this junta coup. Today there were no confirmed fallen heroes. This is the number verified by AAPP, the actual number of fatalities is likely much higher. We will continue adding as and when.

In the morning of June 26, De Myat Nyein, reporter at Zeyar Times News Agency based in Sagaing City, was arrested at his home. On the night of June 25, seven youths named Hein Thant Zin, Thiha Tun, Hein Min Oo, Sabel Htoo, Aung Paing, Wai Phyo Aung and Aung Htet were arrested by soldiers and police pretending to check overnight guest registration in North Okkalapa Township, Yangon Region. On the night of June 24, Than Than Aye, NLD Chairman of the ward and village in Aye Thar Yar Town in Shan State’s Taunggyi Township, was arrested by soldiers. Kyaw Swar Win, former Major in the military, who had previously been sentenced to two years imprisonment for signing a constitutional amendment, was arrested at his home in Pyin Oo Lwin in Mandalay Region on June 22.

On June 25, Thaw Gyi, NLD executive member of Thazi Township, was sentenced to three years imprisonment under Section 505(a) of the Penal Code by the court in Meiktila Prison in Mandalay Region.

Over 60 people, who have been sentenced under Section 505(a) of the Penal Code in Myeik Prison in Tanintharyi Region, are being forced labor for 8 hours a day from Monday to Friday, 10 hours across Saturday and Sunday.