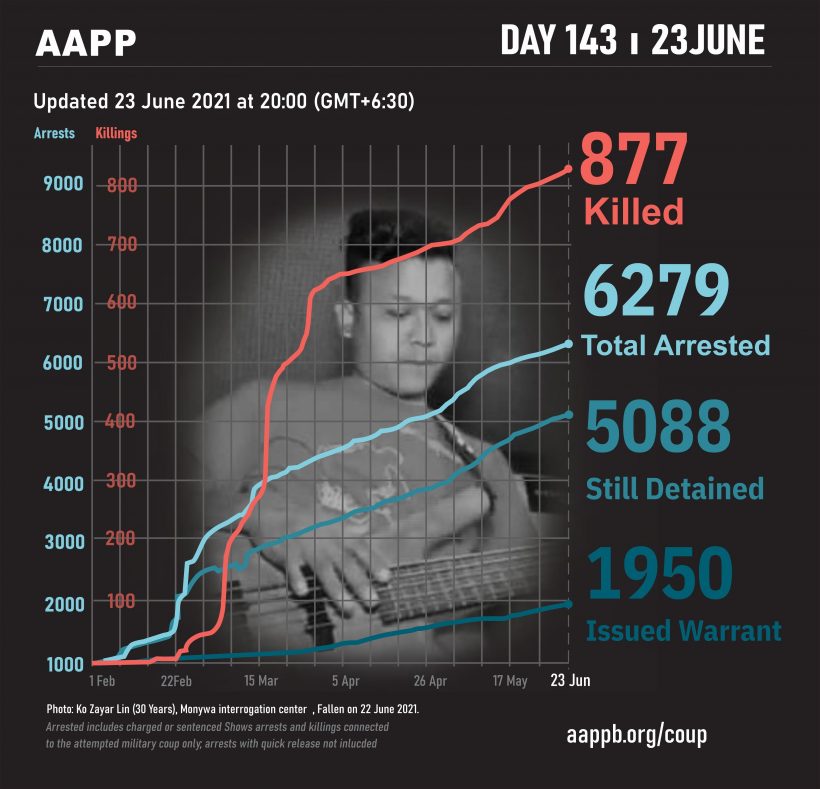 As of 23 June, (877) people are now confirmed killed by this junta coup. AAPP compiled and documented (2) fallen heroes today. These (2) fallen heroes from Monywa Township in Sagaing Region and Kyaingtong Township in Shan State were killed on previous days and documented today. This is the number verified by AAPP, the actual number of fatalities is likely much higher. We will continue adding as and when.

Zayar Linn from Lalzin Sanpya Village in Monywa Township’s Sagaing Region was arrested and beaten on the night of June 21. His family was informed on the morning of June 22 that he died. He was found with wounds consistent with torture, one large on the back of his head and all over his body.

In  addition to this, on the night of June 19 at Kyaingtong Town in Shan State, Than Soe Aung, a local, was injured and his one year and six month old daughter was killed when they were hit by a car driven by Deputy Officer of the General Administration Department (GAD) in Kyaingtong Township. This was after Than Soe Aung did not stop when told by the junta forces when riding his motorcycle to go to a clinic for his ill daughter. Moreover, Than Soe Aung is being detained at the Kyaingtong Myoma Police Station and has been charged with two lawsuits against him at the station.