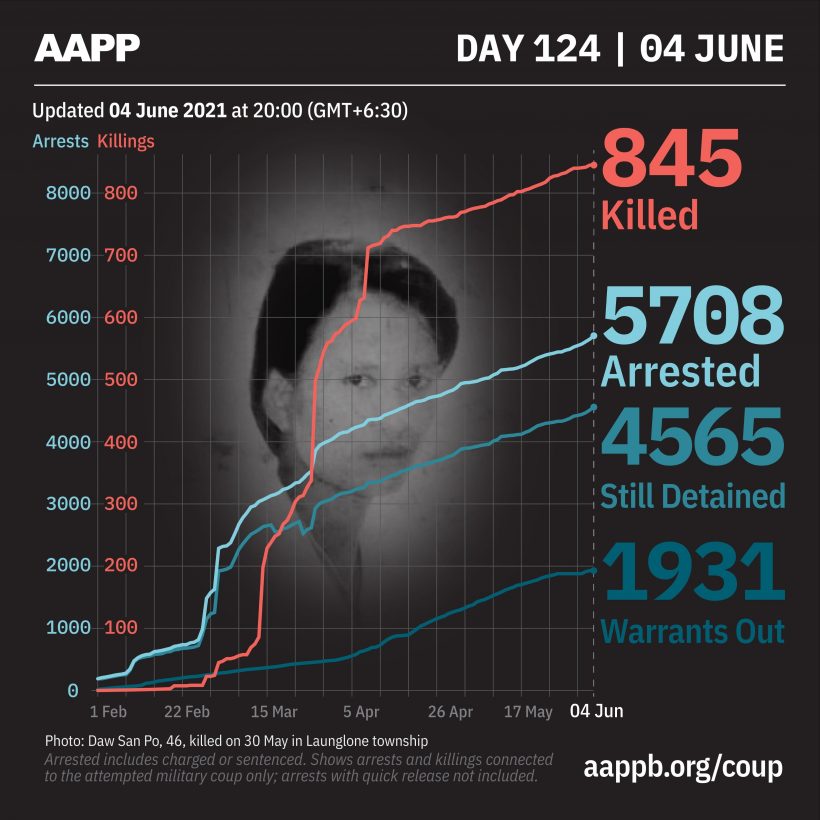 As of 4 June, (845) people are now confirmed killed by this junta coup. Today there were no confirmed fallen heroes. This is the number verified by AAPP, the actual number of fatalities is likely much higher. We will continue adding as and when.

As of 4 June, a total of (4565) people are currently under detention; of them (156) are sentenced. 1931 have been issued arrest warrants; of them 31 were sentenced to death and 14 to three years imprisonment  with hard labour and 39 to 20 years imprisonment with hard labour, who are evading arrest. We are verifying the recently released detainees and continuing to document.

By 1am on 4 June, Khun Aung Sann was beaten and arrested at his home at Taunggyi Town in Shan State by the junta. The youth’s phone was confiscated and people downstairs in his home were also assaulted. On the 3 June afternoon, Lwin Ko Chit a.k.a Phoe Chit, who is a leader of Sanay Charity Group, Bhamo Town in Kachin State, was arrested by junta troops. Ni Ni Nyunt, headmistress of B.E.M.S (3) of Taungdwingyi Town in Magway Region, was charged under Section 505 (a) of the Penal Code in the morning of 3 June for her involvement in the Civil Disobedience Movement (CDM). She was arrested in March. Thet Tun Aung a.k.a Maung Htoo San, a professional photographer, who was charged under Section 505 (a) of the Penal Code, was sentenced to three years imprisonment on 3 June. He was arrested in April after being accused of joining armed training in an ethnic area.