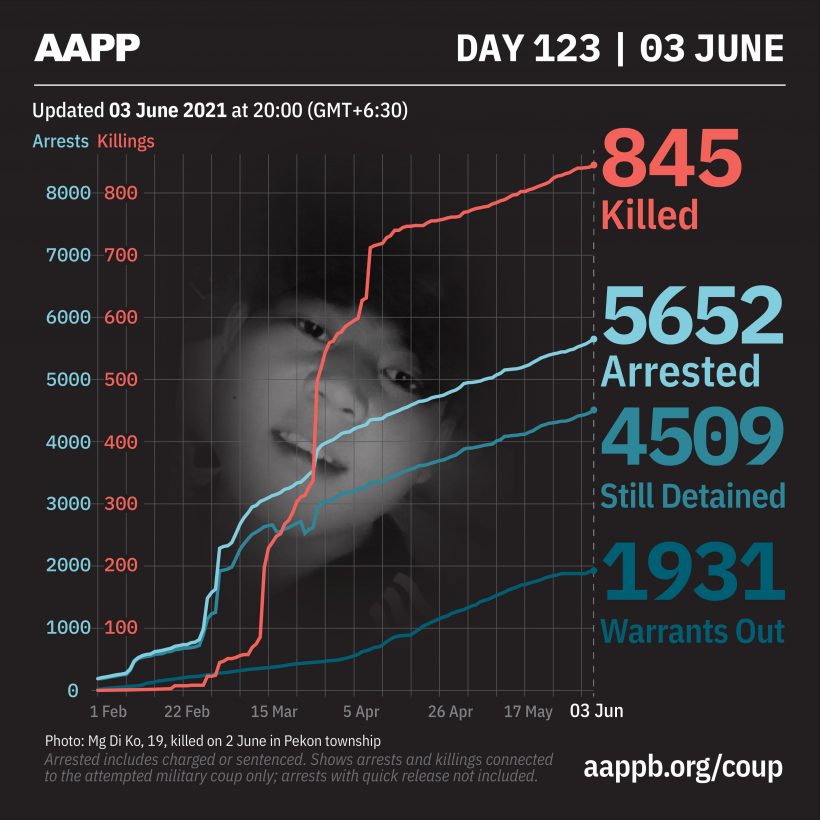 As of 3 June, (845) people are now confirmed killed by this junta coup. AAPP compiled and documented (3) fallen heroes today. These (3) fallen heroes from Launglon Township in Tanintharyi Region and Pekon Township in Southern Shan State were killed on previous days and documented today. This is the number verified by AAPP, the actual number of fatalities is likely much higher. We will continue adding as and when.

As of 3 June, a total of (4509) people are currently under detention; of them (138) are sentenced. 1931 have been issued arrest warrants; of them 31 were sentenced to death and 14 to three years imprisonment  with hard labour, and 39 to 20 years imprisonment with hard labour (who are evading arrest). We are verifying the recently released detainees and continuing to document.

On the night of 2 June, a 19 year-old youth was shot dead to the forehead and another civilian was seriously injured after being shot in the mouth when junta forces opened sniper fire in Mobye Town, Pekon Township in Southern Shan State. Two women, who were arrested with gunshot injuries later died after they ran away in fear when junta troops entered Chaung Wa Pyin village, Launglon Township, Tanintharyi Region on the night of 29 May. Both women were cremated and photos of their bodies were sent to the families by the junta in the evening of 31 May.

In the early morning of 3 June, two NLD members were beaten and arrested at their home in Sein Pan Ward, Mahaaungmyay Township in Mandalay Region after an anti-dictatorship protest in Sein Pann ward. Lawyer Thet Tun Oo, who is representing pro-bono, people arrested for staging anti-dictatorship protests in Myitkyina, Kachin State, was arrested on 2 June. This happened after he testified in a case at the court in Myitkyina Prison. He is currently detained at Myitkyina Myoma Police Station. A lawsuit was filed against him under Section 505(a) of the Penal Code by the Myitkyina Myoma Police Station Officer.