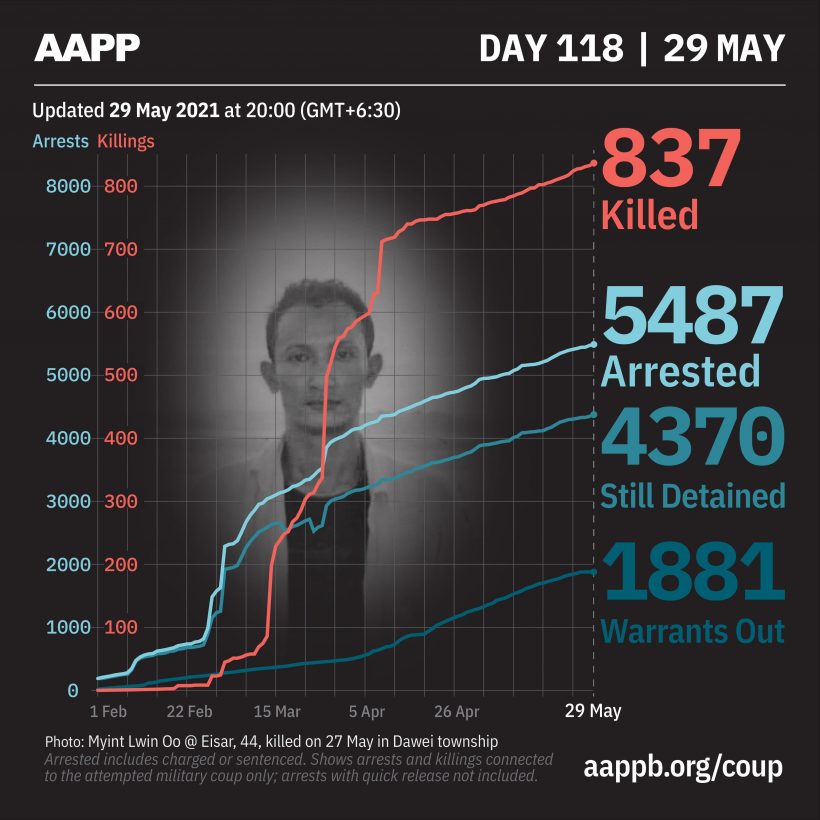 As of 29 May, (837) people are now confirmed killed by this junta coup. AAPP compiled and documented (4) fallen heroes today. These (4) fallen heroes from Insein Township in Yangon Region and Gangaw Township in Magway Region were killed yesterday and documented today. This is the number verified by AAPP, the actual number of fatalities is likely much higher. We will continue adding as and when.

As of 29 May, a total of (4370) people are currently under detention; of them (108) are sentenced. 1881 have been issued arrest warrants; of them 20 were sentenced to death and 14 to three years imprisonment with hard labour, who are evading arrest. We are verifying the recently released detainees and continuing to document.

On the night of May 28, at Pauk Taw Wa in Insein Township, Yangon Region, a youth was brutally killed when a military vehicle intentionally crashed into him, after he did not stop his motorcycle when Division 77 told him to stop to be checked. The fallen youth worked as a model and an actor. On the evening of May 28, a teacher, who was involved in the Civil Disobedience Movement (CDM), and two villagers, were shot to death when junta troops raided Yehla Village in Gangaw Township, Magway Region.

On the evening of May 28, Myint Aung, Minister of Labour, Immigration and Population of Magway Region Government and NLD Chairman of Kanma Township in Magway Region, was arrested at his home. On the night of May 27, a mother was taken as a hostage when the junta could not find her son Pyae Phyo Paing, a political activist, as they searched for him in Taungdwingyi Town in Magway Region. On May 27, lawyer Ayar Linn Htut was arrested representing political prisoners at Hinthada District Court, in Ayeyarwady Region. A lawsuit has been filed against her under Section 505(a) of the Penal Code at the Hinthada Police Station.