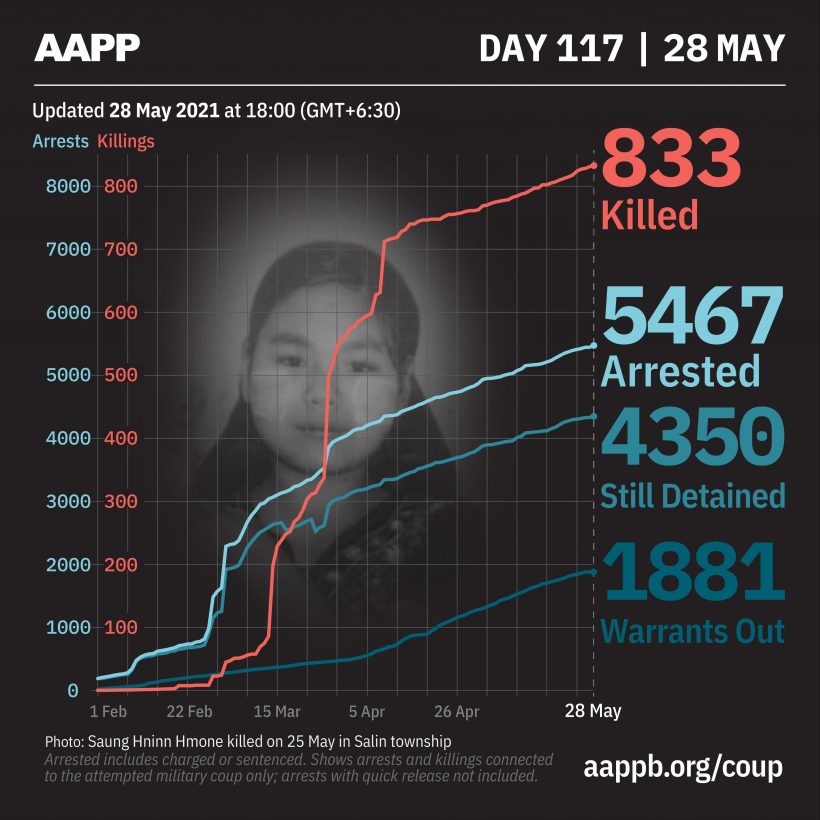 As of 28 May, (833) people are now confirmed killed by this junta coup. AAPP compiled and documented (2) fallen heroes today. These (2) fallen heroes from Loikaw Township in Kayah State and Dawei Township in Tanintharyi Region were killed yesterday and documented today. This is the number verified by AAPP, the actual number of fatalities is likely much higher. We will continue adding as and when.

As of 28 May, a total of (4350) people are currently under detention; of them (104) are sentenced. 1881 have been issued arrest warrants; of them 20 were sentenced to death and 14 to three years imprisonment with hard labour, who are evading arrest. We are verifying the recently released detainees and continuing to document.

Yesterday afternoon, a 14 year old boy was shot dead in the head as he ran away from junta forces, who had entered Kayan Tharyar Village, in Thabyay Kone, in Loikaw Township, Kayah State. Last night, a man was shot and left injured during unprovoked shooting by the military in Kyet Sar Pyin Ward, Dawei Township in Tanintharyi Region. Junta forces then took him away by car, and he later died.

On May 28, Mi Nge a.k.a Nge Lay, a former female political prisoner, was sentenced to three years imprisonment under Section 505(a) of the Penal Code . On May 2, junta forces searched her home for her son, political activist Tin Htut Paing. When they could not find him, they arrested and beat her.

This afternoon, Myo Thiha Kyaw, a photojournalist for the Myanmar Pressphoto Agency, was arrested in Mandalay. Last night, in Thaton Township in Mon State, four youths from Manaw Phyu Charity Association were arrested.