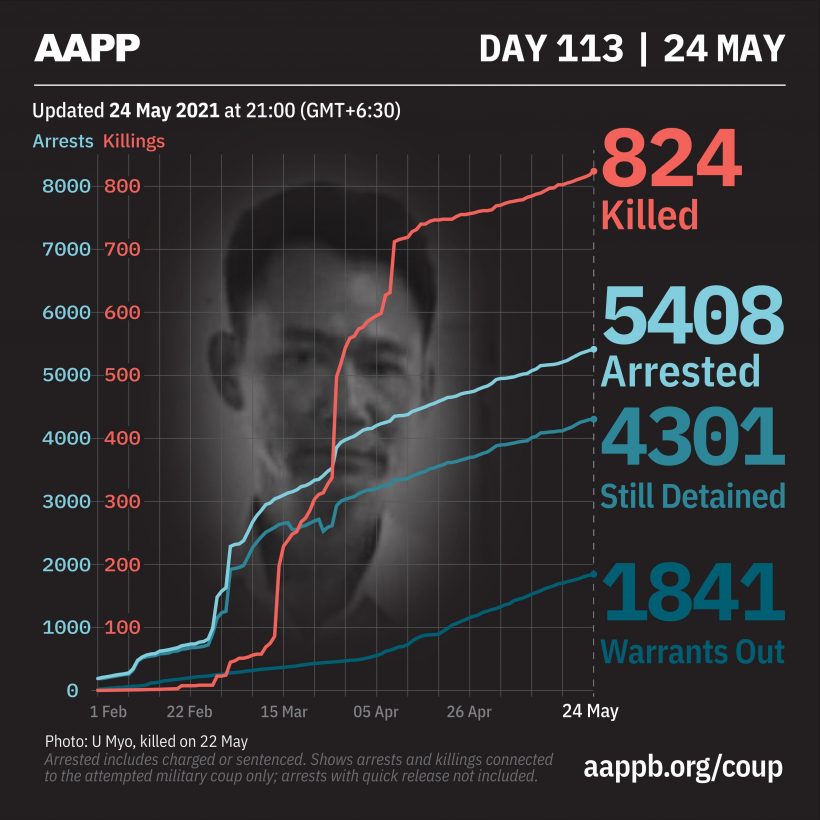 As of 24 May, a total of (4301) people are currently under detention; of them (96) are sentenced. 1841 have been issued arrest warrants; of them 20 were sentenced to death and 14 to three years imprisonment with hard labour, who are evading arrest. We are verifying the recently released detainees and continuing to document.

On the night of 23 May, a man from Myaung Kone Village in Kani Township, Sagaing Region was shot dead in the head. Last night, a villager from Kone Thar Village in Kayah State was killed, he was shot in the stomach while he was driving a motorbike, the motorbike hit the  lamp-post, and broke his leg. Junta forces opened fire yesterday evening when they raided the football ground in North Dagon Township, Yangon Region, a youth was shot  when he climbed on the wall to run away and fell on the ground. He was arrested with a forehead and gunshot injury, and later died. Yesterday, a clash between the People’s Defense Force (PDF) and junta troops led to a PDF member  shot in the thigh and died due to excessive bleeding.

On the night of 22 May, a man, who was shot and arrested with injuries in an ‘unprovoked’ shooting by terrorist troops into wards at Htantabin Township in Bago Region. His family was later informed he had died. A private boarding school principal from Myo Thit Township in Magway Region with preexisting health conditions, died from being forced to sit in a stress position (called “Pon Zan”) after he appeared before the court in Magway Prison on May 21.

Freelance reporter Super (a.k.a Kyaw Zin Win) was arrested at gunpoint this afternoon in Mandalay City. Last night, both parents and a younger brother were detained as hostages when the junta did not find a CDM striking worker from the fire department in Thegon Town in Bago Region.