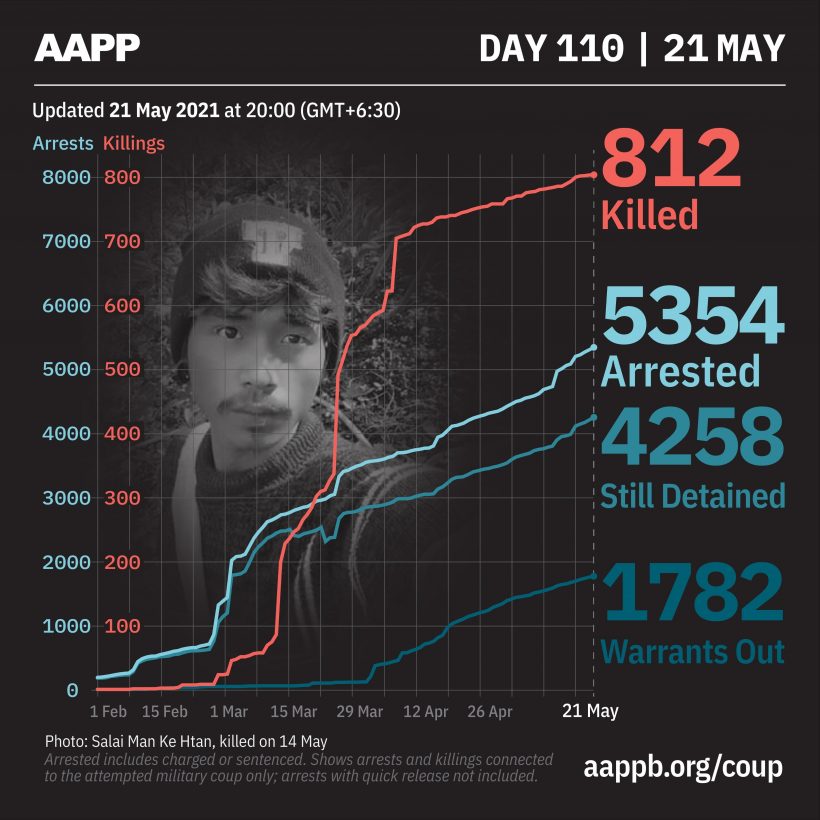 As of 21 May, (812) people are now confirmed killed by this junta coup. AAPP compiled and documented (2) fallen heroes today. (1) from Falam Township in Chin State died on 21 May. (1) from Thabeikkyin Township in Mandalay Region was killed the previous day and documented today. This is the number verified by AAPP, the actual number of fatalities is likely much higher. We will continue adding as and when.

As of 21 May, a total of (4258) people are currently under detention; of them (94) are sentenced. 1782 have been issued arrest warrants; of them 20 were sentenced to death and 14 to three years imprisonment with hard labour, who are evading arrest. We are verifying the recently released detainees and continuing to document.

Since the military coup, civilians have lost their freedom, just going around their communities is a life-threatening situation. On the night of 19 May, Chaung Gyi village, Thabeikkyin Township, Mandalay Region, a young man was killed after the junta chased, arrested, beat him in the face and shot him in the abdomen. Shooting, killing detainees are clearly barbaric. When the coup fails, perpetrators will have to pay for each and every one of their crimes.

In Chin State, fighting continues between the Chin National Defense Force (CNDF) and the junta. As reported this morning, a member of the CDF-Falam was killed in a clash. The weapons and forces of both sides are not equal, still, people are defending themselves against terrorism. If they don’t, atrocities will only deteriorate. For this reason civilians are defending with anything they can use as a weapon, to attain freedom for their regions.

That is why the terrorist group is increasingly hostile and threatening in different ways in Chin State. Beginning today in Mindat Township, the junta cut off water, electricity and telephone lines. The junta is attacking locals like a military operation, cutting aid to people in Mindat to make the locals weaker  and unable to regroup, and resist. Resistance against the junta is accelerating, the People’s Defense Forces (PDF) retaliated against shooting by the terrorists at Daw Ngan Khar Ward, Demoso Township, Kayah State this morning. RPG and bombs were used by the junta group to fire at locals during the fight. As a result, some civilians, who live in the city, have been fleeing. It is a worrying situation because the junta troops might plan an offensive attack on Demoso Township like they did in Mindat Township.

The junta group fires heavy artillery, mortar shells and bombs into residential areas, they violate international law – this is but one action of theirs which demonstrates their illegitimate terrorist status. On 21 May, at the Daw Ngan Khar intersection, Demoso Township, it is reported that two men on a motorbike were told to stop, when they drove away one was shot and killed. AAPP is monitoring this event for further information. In a separate incident, a highway bus driver was also reportedly shot in the arm and injured.

In fact they are committing crimes, including shooting and killing. The junta group commits shooting, killing, and other rights abuses on a daily basis. This is because there is no effective deterrence. The junta group is now making a series of arrests against activists. Today, around noon, two Kachin youth activists including Seng Nu Pan and Lun Zung were arrested. Two other youths who were in the car with them were also detained. The junta troops shot and crashed into them with a vehicle before arresting them. Their inhumanity is evident. Terrorists use brutal ways to capture civilians who oppose them.