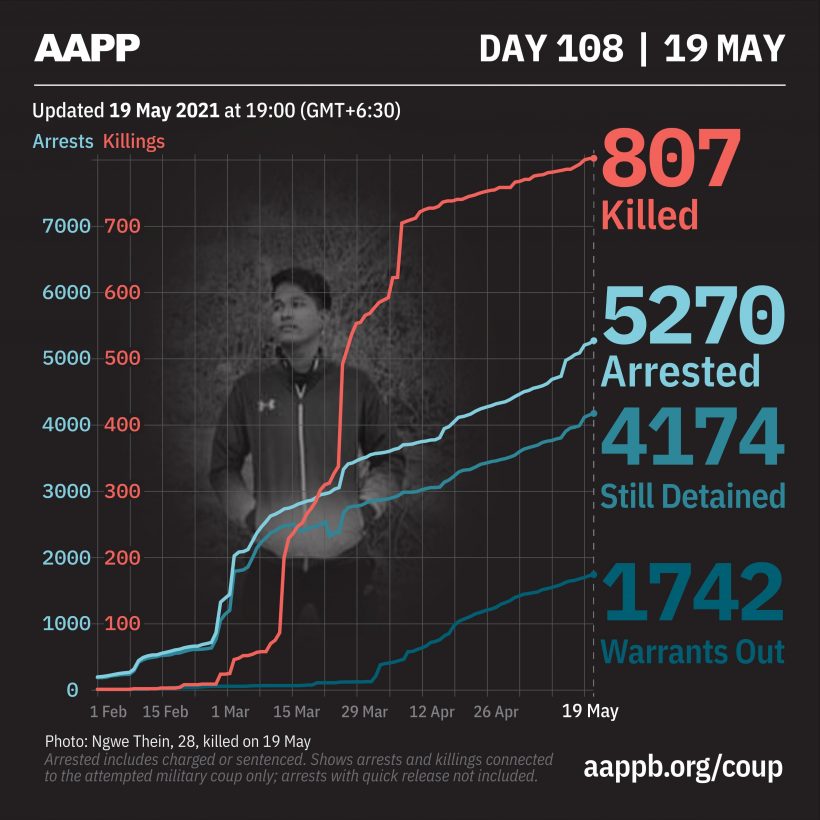 As of May 19, a total of (4174) people are currently under detention; of them (94) are sentenced. 1742 have been issued arrest warrants; of them 20 were sentenced to death and 14 to three years imprisonment with hard labour, who are evading arrest. We are verifying the recently released detainees and continuing to document.

Despite the junta’s relentless oppression, people across Burma continue to protest in various ways, to oppose this military dictatorship. This morning in Thaketa township, Yangon Region, the so-called police used motorbikes to crack down on civilians as they gathered for a university student protest. Three civilians were arrested.

The indiscriminate shooting of civilians by these terrorists are worsening every day. Last night, in Pyay Township, Bago Region, a man was shot and taken away by junta forces with his injuries. This morning, his family were told to collect the dead body. In a similar case, on May 17, a young man was shot and detained with his wounds as junta forces raided a restaurant. His family were notified five hours later that he was dead.

Families of those injured are often not notified of the victim’s arrest, or of any injuries and are often only contacted after the victim’s death. This shows this junta’s dishonesty. It also remains unknown whether victims are given access to medical treatment. Junta forces treat detainees in cruel ways which violate human rights and human dignity. Many other detainees have faced various atrocities whilst under detention.

Junta forces use fraud, bribery and extortion to deceive and opress civilians. Parents of detained children have been made to pay more than 5 million kyats (USD$3037) to the junta for the release of their child, yet after paying, these children have still not been released. There have also been reports that artists and other wealthy civilians have been requested to pay 20 million kyats in order to have their names removed from the warrant list. Specific confirmation of this is yet to be verified. Only releasing detainees after receiving payment is extortion and a form of abduction. These actions clearly show the criminal nature of this  junta regime.

Junta terrorists have been attempting to divert civilian’s interest away from participation in politics. In states, regions and villages across Bago,  Magway, Mandalay, Saging and Irrawaddy Regions, the junta has officially allowed gambling. This terrorist group is leading Burma down a path of destruction in order to maintain power. This illegitimate group is committing illegal acts, pushing the country further into instability day by day.

Under junta control, children have also been severely oppressed. Last night in Bago City, Bago Region, two 14-year-old children and an 18-year-old young man were beaten and arrested. According to AAPP’s documentation, as of today, a total of 73 children have been detained and a total of 53 children have been killed. This is an extremely concerning situation for all of Burma’s children. Since the coup, children have not been granted access to protection in any way. Even though Burma is one of the countries which has ratified the United Nations Convention on the Rights of the Child, as the junta is an illegal terrorist group, it is unsurprising that these rights are not respected.

LGBTIQ communities have also faced oppression, without any protection, throughout the coup. An activist from the LGBTIQ community was arrested at gunpoint yesterday evening in Mingalardon Township, Yangon Region. This terrorist group uses acts of violence that severely violate human dignity against civilians during their interrogations. This stresses concern for the safety of this LGBTIQ detainee, who inevitably can be deprived of their basic rights.