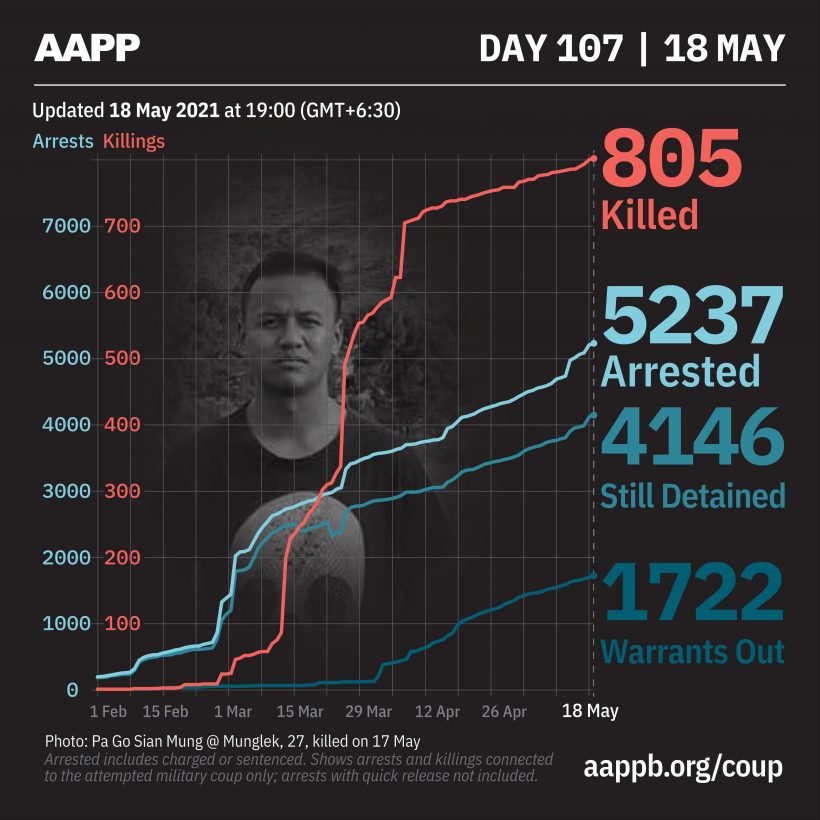 As of 18 May, (805) people are now confirmed killed by this junta coup. AAPP compiled and documented (3) fallen heroes today. These (3) fallen heroes from Mindat Township in Chin State, South Dagon Township in Yangon Region and Daik-U Township in Bago Region were killed on previous days and  documented today. This is the number verified by AAPP, the actual number of fatalities is likely much higher. We will continue adding as and when.

The Assistance Association for Political Prisoners (AAPP) has not confirmed any fallen heroes today. This is the number verified by AAPP, the actual number of fatalities is likely much higher. We will continue adding as and when.

As of May 18, a total of (4146) people are currently under detention; of them (92) are sentenced. 1722 have been issued arrest warrants; of them 20 were sentenced to death and 14 to three years imprisonment with hard labour, who are evading arrest. We are verifying the recently released detainees and continuing to document.

Today, people continued to protest against the military dictatorship in various strikes across Burma. The junta’s brutal shooting however, continues to worsen. Last night, a civilian was shot dead in Daik-U Township, Bago Region. The people of Burma experience constant insecurity on a daily basis, as this terrorist group continues threatening civilians with its use of armed forces and weapons.

The junta regime has been using many different forms of oppression on any regions that fight back against them. Last night, they cut off the supply of drinking water in Mindat Township, Chin State. This is one of the most vicious tactics that the military has exercised throughout all its operations. It is a clear expression of the hatred the military has for innocent civilians.

Junta terrorists have also been destroying state-owned, public, and private properties, both day and night. Yesterday, junta troops stormed local shops in Ka Myaing village, Thayet Chaung Township in Tanintharyi Region, threatening to shoot. They also destroyed materials inside the IELTS English training school in Muse Township in Shan State on May 16 after they were unable to find a wanted individual. Due to this violent destruction, civilians live in constant fear for their property and security, which they have been left to protect on their own.

Raids and arrests by junta terrorists in Thalin village, Kani Township, in Sagaing Region have forced the whole village to begin fleeing since yesterday afternoon. The same situation occurred to locals in  Kanpetlet Township, Chin State, where the military has expanded its forces. The junta regime uses various methods to suppress civilians in areas which oppose them, in order to weaken local defence forces and prevent further resistance. Similar oppressions will be seen in both urban and rural areas, for as long as the dictatorship lasts.

Acts of vandalism and destruction have been occurring across Burma. The Basic Education no.14 Post-Primary School in South Dagon Township, Yangon Region was set on fire last night, and one of the nine teachers involved in CDM was arrested following accusations from the school principal. According to locals, the junta terrorists have been committing various kinds of oppression, which include the arrest of those involved in CDM and this arson attack. Arson is a method which is frequently used by the junta against the people.

It has been more than 100 days since the junta coup. The international community, including ASEAN, has been extremely slow to respond and take action for Burma. The meeting scheduled on May 18 to draft a resolution on Burma at the UN General Assembly, has been postponed. It is the people who will continue to experience brutal human rights abuses of this seemingly endless terrorist regime.