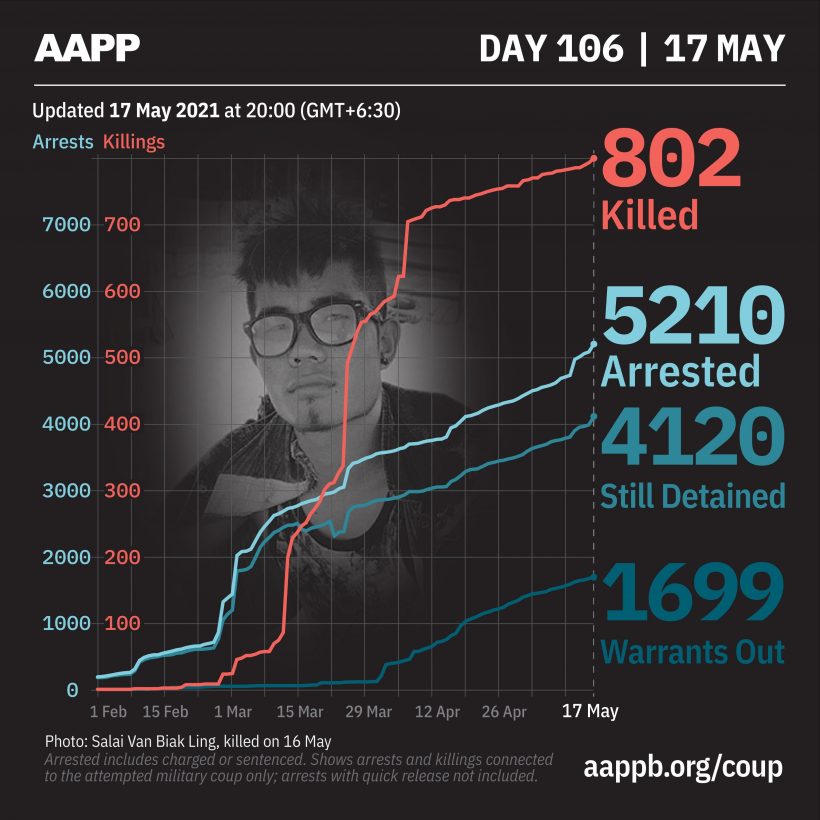 As of 17 May, (802) people are now confirmed killed by this junta coup. AAPP compiled and documented (6) fallen heroes today. These (6) fallen heroes from Mindat, Hakha, Tedim and Tamu Townships in Sagaing Division, Myingyan Township in Mandalay Region and South Dagon Township in Yangon Region were killed in previous days and have been documented today. This is the number verified by AAPP, the actual number of fatalities is likely much higher. We will continue adding as and when.

The Assistance Association for Political Prisoners (AAPP) has not yet confirmed any fallen heroes today. This is the number verified by AAPP, the actual number of fatalities is likely much higher. We will continue adding as and when.

As of May 17, a total of (4120) people are currently under detention; of them (92) are sentenced. 1699 have been issued arrest warrants; of them 20 were sentenced to death and 14 to three years imprisonment with hard labour, who are evading arrest. We are verifying the recently released detainees and continuing to document.

Today, people across Burma continued to protest against the oppressive military dictatorship. In Tanintharyi Region today, a protest in Dawei was violently cracked down on by junta forces using civilian vehicles to crash into protesters, leaving many injured. In this crackdown, seven civilians were arrested and one was shot with a rubber bullet. Junta forces are now using this brutal method of suppressing protests by crashing into civilians with cars on a daily basis. This is a clear expression of hostility towards civilians, and shows the junta will use any means to inflict harm on the people.

The junta terrorists used heavy artillery and live ammunition last night across Mindat Town, Chin State, following massive raids on Mindat Town yesterday. Similar shooting occured today, destroying houses. A 10 year-old girl who was hiding inside a house was shot and remains in a critical condition. Junta troops have been violently damaging houses and shops, and looting goods. In addition to this, displaced civilians who have been hiding in the  jungles are in desperate need of food, shelter, and medical supplies.

The use of such violent force against a small town warns any other town that resists against the junta, that they will face the same brutality. The people of Burma however, have shown they are not afraid of junta threats, and will continue to fight to defeat the military dictatorship. The people will not accept any negotiations, and will only accept solutions which hold the junta fully accountable for the deaths of over 800 civilians.

Last night, junta forces opened fire in Tedim Town, Chin State. Two youths from Tedim Town were killed. The death of one of the two victims is still under investigation; if it is confirmed, the death will be added to the AAPP fatality list. Yesterday evening in Hakha township, Chin state there was a clash between the Chin State Defense Force (Hakha) (CDF-Hakha), and the junta terrorists, which resulted in the death of  a young man from the CDF-Hakha.

This terrorist group continues its daily shooting and the number of civilian deaths are rising, yet no effective action has been taken to bring down the Junta. The country is unstable and the rule of law has ceased.

In South Dagon Township, Yangon Region, the junta returned the rotting body of a man who was arrested on May 14. In order to get permission to cremate his body, medical papers had to be signed which stated he died from pre-existing health conditions. His body was returned displaying many wounds consistent with torture. His face was badly bruised, with his entire mouth swollen, and his teeth appeared to be broken. The junta closely followed the funeral, ensuring no photos were taken.

Torture is extremely cruel and inhumane, yet the terrorists continue to use such brutal methods to intimidate the people of Burma, and prevent them from opposing. They also continue to force victims’ family members to sign false medical records, in an attempt to cover up deaths caused by their torutre, and destroy evidence of their brutality. If this military dictatorship ends and democracy is restored, the junta will be held accountable for each and every one of their actions, regardless of their attempts to hide them.