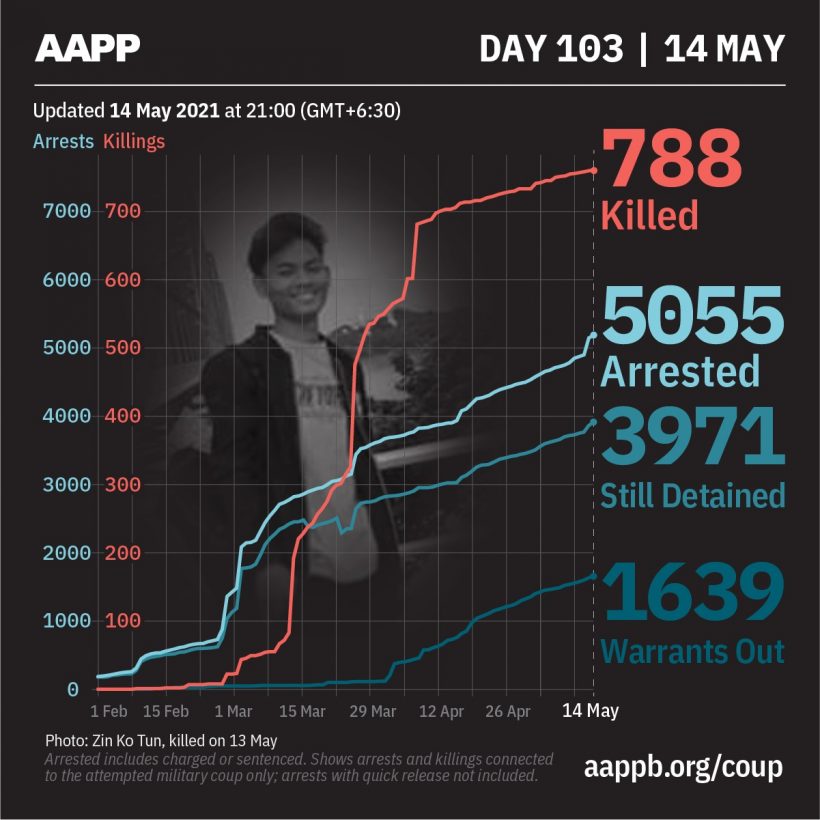 As of 14 May, (788) people are now confirmed killed by this junta coup. The Assistance Association for Political Prisoners (AAPP) has not yet confirmed any fallen heroes today. This is the number verified by AAPP, the actual number of fatalities is likely much higher. We will continue adding as and when.

As of May 14, a total of (3971) people are currently under detention; of them (92) are sentenced. 1639 have been issued arrest warrants; of them 20 were sentenced to death and 14 to three years imprisonment with hard labour, who are evading arrest. We are verifying the recently released detainees and continuing to document.

Today people across Burma continue to protest against the dictatorship, and from some Townships in Chin State, Magway Region, and Sagaing Region people remain resistant to the intensified terrorist attacks. In Kyaukme, Shan State, the protest was crackdown by the junta but the protesters continued to gather.

The junta cracks down on protests daily, they are searching and arresting, for not only protest leaders but also ordinary demonstrators. On 13 May Nabule Area, Dawei Township, Tanintharyi Region, a dawn protest was crackdown by the junta group. The junta searched and followed the protest, more than 30 protestors including CDM teachers were forced to flee their homes and now are experiencing a shortage of water and food. The junta group has made a series of arrests and crackdown on protesters to bring the demonstrations to an end and prevent them from gathering.

Civilians are persecuted daily, on 13 May, in Mel Thel Kyo Kwin village tract, Chaung Oo Township in Sagaing Division, the junta raided a Gen Z’ Camp, two youths who tried to flee got shot in the leg and beaten in the head. They were kicked in the abdomen and ribs with boots, they were brutally beaten and their faces were swollen, the junta tortured the two youths so much they could not even identify their faces. As a result of this inhumanity, two young men are in a critical condition and reportedly dead. During the raid, weapons were confiscated, and several motorcycles from that camp set on fire.

Torture is a serious crime, in Burma the perpetrators are granted impunity. This is why persecution is becoming more brutal, and they are free to commit crimes against humanity against civilians. Only when dictatorship is over will we have the right to live with dignity and security, but the crimes must be held accountable.

Since the coup, journalists have been detained for providing timely updates and information on the terrorist group’s repression. Journalists are increasingly being arrested, sentenced, and forced to evade warrants. On 12 May, a reporter from Democratic Voice of Burma (DVB) was sentenced to three years in prison. On 13 May in Yenangyaung Town, Magway Region, A journalist formerly with the Tomorrow Journal was arrested. The terrorist group is cutting off the freedom of the press because the people seeing this information frightens the junta. The only way is to promote local media and help fight back against the terrorist group and restore democracy in Burma.