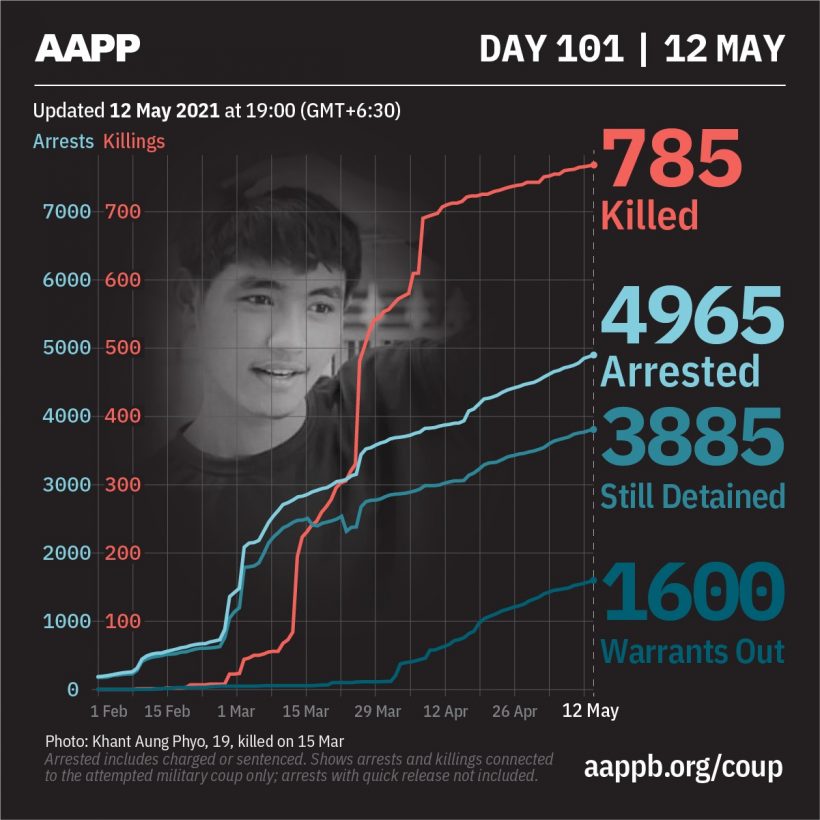 As of 12 May, (785) people are now confirmed killed by this junta coup. AAPP compiled and documented (2) fallen heroes today. These (2) fallen heroes from Kani Township in Sagaing Region and Hakha Town in Chin State were killed the previous days and documented today. This is the number verified by AAPP, the actual number of fatalities is likely much higher. We will continue adding as and when.

As of May 12, a total of (3885) people are currently under detention; of them (86) are sentenced. 1600 have been issued arrest warrants; of them 20 were sentenced to death and 14 to three years imprisonment with hard labour, who are evading arrest. We are verifying the recently released detainees and continuing to document.

Today, people from all over Burma continued to protest against the military dictatorship. Junta forces use various forms of bullying and violence to intimidate civilians, yet the people continue to fight back, using anything they can find as a weapon.

Today in Pyigyidagun Township, in Mandalay City the junta violently suppressed the Mandalay Coalition Strike. Many of the protesters were arrested and beaten. At least three teachers were arrested and 30 motorbikes were stolen. After more than three months since the coup, the junta has shown their lack of administrative power and inability to govern. Because of this, they use numerous forms of violence instead to suppress the people. They are now cracking down on protests before they even start.

This terrorist group continues to torture and murder civilians. On 9 May, a local farmer from Hakha Town in Chin State was detained and tortured by the junta. He later died on 11 May. Brutal oppression and torture have been systematically used by the junta in all previous military dictatorships, and they are continuing this practise in the current coup in order to intimidate and coerce civilians into obedience. This junta treats civilians as their enemies. The only way to free the people from these persecutions is to end the dictatorship.

On the night of May 10 in Kale Town in Sagaing Region, a woman died after junta shootings in the community caused her to have a heart attack soon after giving birth. As well as this, last night in Thamin Chan Villang, Kani Township in Sagaing Region junta forces shot dead a mentlly ill man in his own home because he insulted military forces who were camped in that village. The junta’s hostile behaviour and unprovoked shootings are worsening, and they are now even targeting those with mental illnesses.

Remote areas in Burma have been severely targeted in recent days. Today, in Zee Pin Dwin Village, Kanai Township in Sagaing Region, locals were forced to flee their homes as junta forces entered the village and were arresting anyone they could find. In Magway Region, Taungdwingyi Township, junta forces who were camped in many local villages destroyed people’s homes and other properties.

In addition, these terrorists have staged severe crackdowns on civilians who resist them. In Talot town, Myingyan Township in Mandalay Region, there were clashes between the People’s Defense Forces and the junta. Early this morning, the junta fired heavy artillery and raided the town, arresting more than 100 locals, including women, children and the elderly. Young people were beaten, arrested and interrogated. Only by overthrowing this dictatorship will these violent attacks, which turn villages and towns into war zones end.

The junta, which seized power by force is now suppressing, arresting and suing children. They openly violate domestic law, international law and international human rights treaties. In South Okkalapa Township in Yangon Region, nine young people have been arrested since 30 April. Among these are four young people under the age of 17 who have not yet been released. This case not only shows a direct violation of domestic children’s rights, but also shows a violation of the United Nations Convention on the Rights of the Child (CRC), ratified by Myanmar. It is clear this terrorist group will not obey or respect any law because they illegitimately seized power.