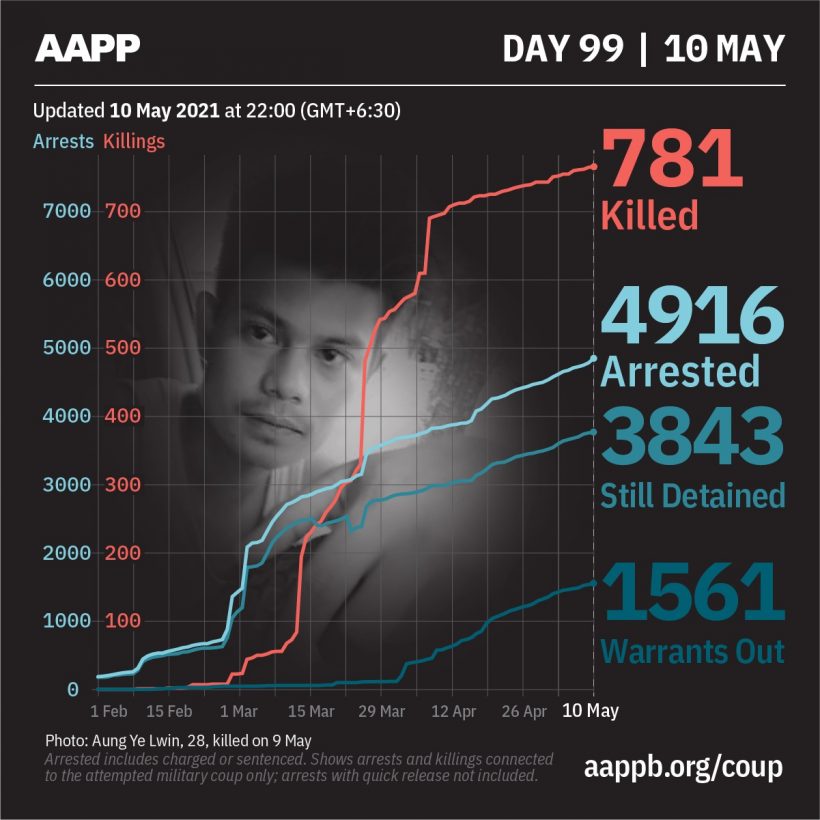 As of May 10, a total of (3843) people are currently under detention; of them (86) are sentenced. 1561 have been issued arrest warrants; of them 20 were sentenced to death and 14 to three years imprisonment with hard labour, who are evading arrest. We are verifying the recently released detainees and continuing to document.

Today civilians continued to protest against the junta in different ways, such as participating in the White Shirt Campaign. Early this morning, in Meiktila town, Mandalay Region, a protest was cracked down on and 15 people were arrested.

In recent days, the terrorists have made a series of arrests, particularly targeting individuals leading forms of opposition against junta forces. Yesterday afternoon so-called police raided the Star City Home in Building B5, Thanlyin Township, Yangon where they arrested and blindfolded 14 people. During this brutal crackdown, it was reported that a medical university graduate died after falling from a building. Although initial reports state he fell, some media have since reported that he was pushed by so-called police and soldiers. This inhumane act again shows that junta forces do not value the lives of civilians. Since the coup, civilians have faced various forms of torture during their arrest.

This junta group displayed its inhumanity when they forced the family member of a clearly tortured victim to sign a death certificate stating they had simply died of a disease. Poet Khet Thi who died yesterday was found with wounds consistent with torture, yet his wife had to sign a confession stating he died due to his pre-existing health conditions in order to recover his dead body. Forcing civilians to sign these confessions allows the junta forces to cover up their atrocities and destroys the evidence of their crimes. They use this to claim their actions are lawful. Action must be taken to ensure those who commit these crimes take full responsibility.

The junta has attempted in various ways to deprive the people of “democratic” freedom. Since the coup, the freedom of the people has been stripped and the essence of democracy has faded. Last night in Bago City, Bago Region, terrorist groups destroyed the Democracy Monument, which celebrated the martyrs of the 8888 Uprising and its successors. Yesterday in the early morning, two youths were arrested on the road in Mingaladon Township while they were painting the slogan “We Want Democracy”. Their families have not yet been able to contact them. The people of Burma are fighting against junta forces that have ruled Burma for almost half of a century, to restore democracy and peace. To reinstate Burma’s democracy, the international community and ASEAN must address the current situation with urgency and importance.

This junta group was already detaining women and children, now they are even targeting people with disabilities. Yesterday afternoon in Chanmyathazi Township in  Mandalay City, Sai Hla Min, a disabled man who had regularly attended the Mandalay Monk Union Strike was arrested and not released on bail. Although Burma has ratified the United Nations Convention on the Rights of Persons with Disabilities (UNCRPD), it is clear that in an illegal coup, these kinds of human rights are not respected.