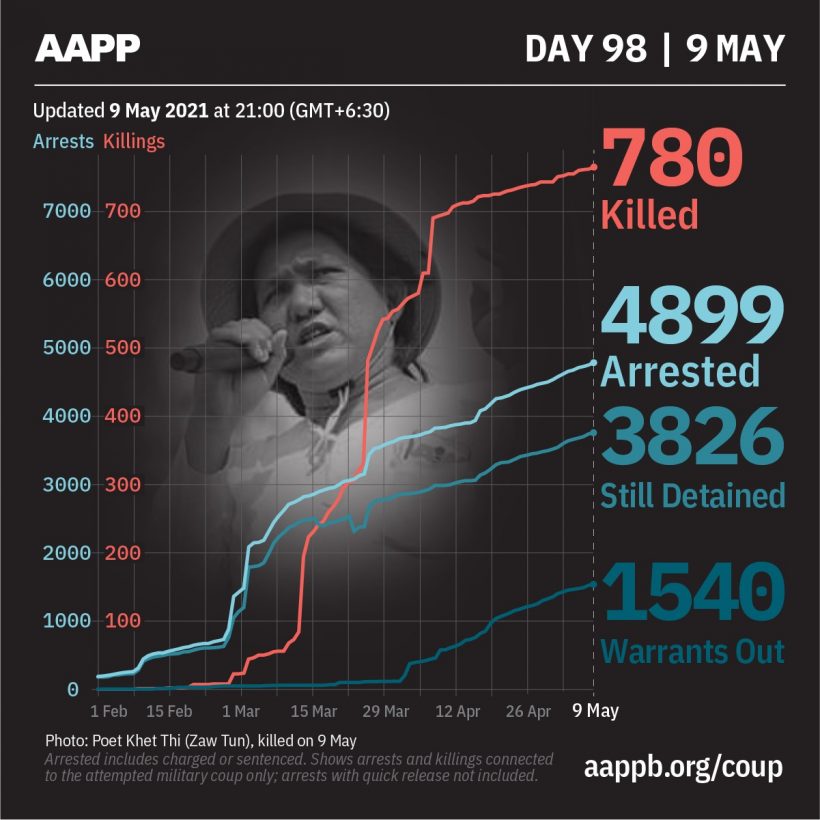 As of 9 May, (780) people are now confirmed killed by this junta coup. AAPP compiled and documented (4) fallen heroes today. (2) from Shwebo and Myinmu Townships in Sagaing Region died on 9 May. (2) from Kani Township in Sagaing Region were killed on previous days and documented today. This is the number verified by AAPP, the actual number of fatalities is likely much higher. We will continue adding as and when.

As of May 9, a total of (3826) people are currently under detention; of them (84) are sentenced. 1540 have been issued arrest warrants; of them 20 were sentenced to death and 14 to three years imprisonment with hard labour, who are evading arrest. We are verifying the recently released detainees and continuing to document.

Protests continue across Burma today, this morning in Meiktila Town, Mandalay Region, a motorcycle protest was repressed with slingshot fire, leaving several people injured. Three civilians were beaten with gunstock and arrested, and around 10 motorcycles were seized. This morning in Pyigyidagun Township, Mandalay City, a group of Yadanarbon University students on their way home after a protest were chased and shot by a civilian car, one car was hit by a bullet. Nowadays the junta are using civilian cars instead of police or military vehicles. They are finding it easier to arrest and crackdown on protests. These covert acts are showing the reality of the terrorist groups barbarity.

Unprovoked shooting and atrocities against civilians are increasing in rural areas. This morning in Kani Township, Sagaing Region, in the Chindwin river, junta troops arrived in a boat and opened fire on civilians, no one was injured. This morning in Myinmu Township, Sagaing Region, they cracked down on the meeting point of a protest, arresting two protesters. When the people demanded their release, the junta opened fire, one civilian was shot on the waist, and one civilian shot dead.

On 8 May in Thamyar village , Natmauk Township, Magway Region, the junta used tear gas and rubber bullets, two locals were injured and seven arrested. Although arbitrary shootings continue on a daily basis, the international community has not taken effective action – so the junta lawlessness is getting worse. Civilians are insecure, lives are constantly in danger. Last night in Shwebo town, Sagaing Region, poet Khet Thi (a.k.a U Zaw Tun) was arrested, he died at the hospital after being tortured in the interrogation center. Khat Thi was arrested along with his wife who is taking part in the CDM, and another house member.

To create a society that guarantees everyone’s right to life and freedom from persecution, we must uproot dictatorship. The terrorist group loots on a daily basis. Last night in Zee Pin Dwin village, Kani Township, Sagaing Region, they raided a village and destroyed homes and property, looting gold, money.

In Bhamo town, Kachin State, on the night of 7 May, the junta raided a motorcycle showroom and stole a tricycle and over 200 motorcycles. Looting and searches were carried out in Myitkyina, Mohnyin and Mogaung Townships taking old and fresh motorbikes from civilians. Since the coup there has been no rule of law, there is a state of panic because civilians lives and private property can be destroyed and looted at any time by armed thugs.

Conflict continues in Kachin State, a woman was shot dead in her head in a clash between the junta and the Kachin Independence Army (KIA) near War Shawng village, Wine Maw Township, Kachin State. The peace process has been wrecked by the tyrancial junta, ethnic people once again feeling the brunt of the civil war.