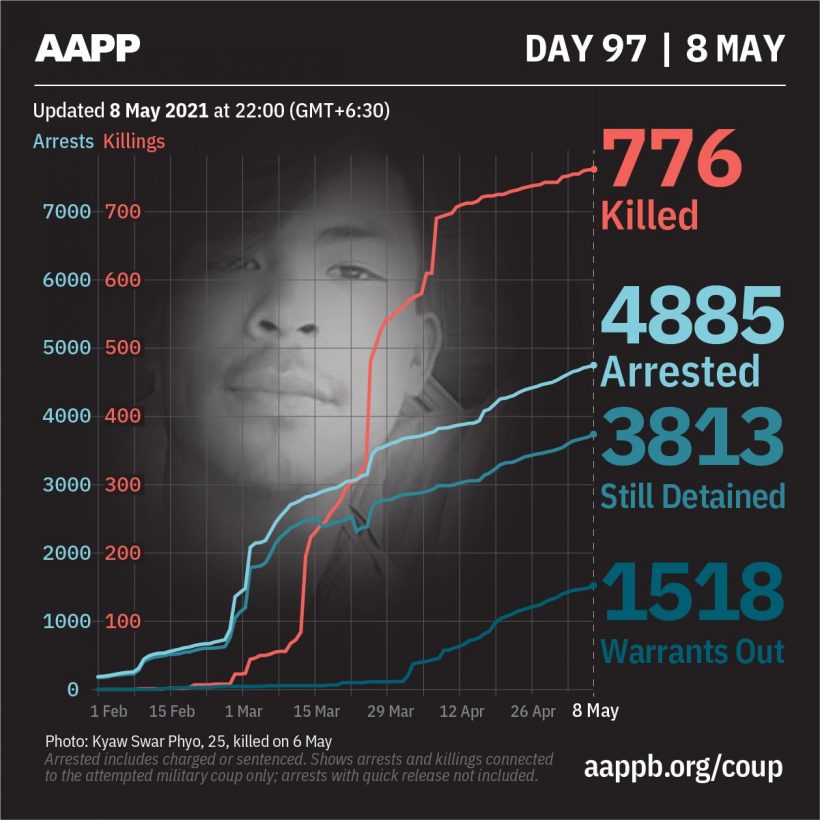 As of 8 May, (776) people are now confirmed killed by this junta coup. AAPP compiled and documented (2) fallen heroes today. These (2) fallen heroes from Kani Township in Sagaing Region and Pauk Township in Magway Region were killed the previous day and documented today. This is the number verified by AAPP, the actual number of fatalities is likely much higher. We will continue adding as and when.

As of May 8, a total of (3813) people are currently under detention; of them (84) are sentenced. 1518 have been issued arrest warrants; of them 20 were sentenced to death and 14 to three years imprisonment with hard labour, who are evading arrest. We are verifying the recently released detainees and continuing to document.

Today across Burma people continue to protest the dictatorship in various ways. Yesterday afternoon, in Kani Township in Sagaing Region, a villager from Kinsanpya Village was shot to death in the forest by terrorists and his family was not able to take his dead body back. Juna forces pointed a gun at a man who went to take the body and slapped him in the face. The junta’s unprovoked shootings and oppressive actions are becoming more violent. They commit crimes affecting the mental and physical security of civilians.

They are openly looting civilians’ property as they wish. Yesterday, in Padauk Pin village, Kanbalu Township, Sagaing Region, some protesters were searched and around 15 houses destroyed. The terrorists stole their money, gold and mobile phones. As of May 8, around 80 Padauk Pin villagers were forced to flee to the forest because the military camped in their village. As long as the dictatorship is in power, the lives of the civilians will continue to be in danger. We can only build a peaceful society if we overthrow the dictatorship.

Fighting has intensified in Kachin State, with reports of a jet attack by the junta using chemical weapons in contravention of international prohibition. The news spread on social media, the Kachin Independence Organization (KIO) is still investigating, it has not yet been confirmed. The use of chemical bombs is a war crime and a serious human rights violation. Ethnic people have been killed and seriously wounded in various attacks by the junta group. Not only this, but they are also being forced to leave their homes, yet these gross violations are only the junta trying to gain an advantage in conflict to maintain the power.