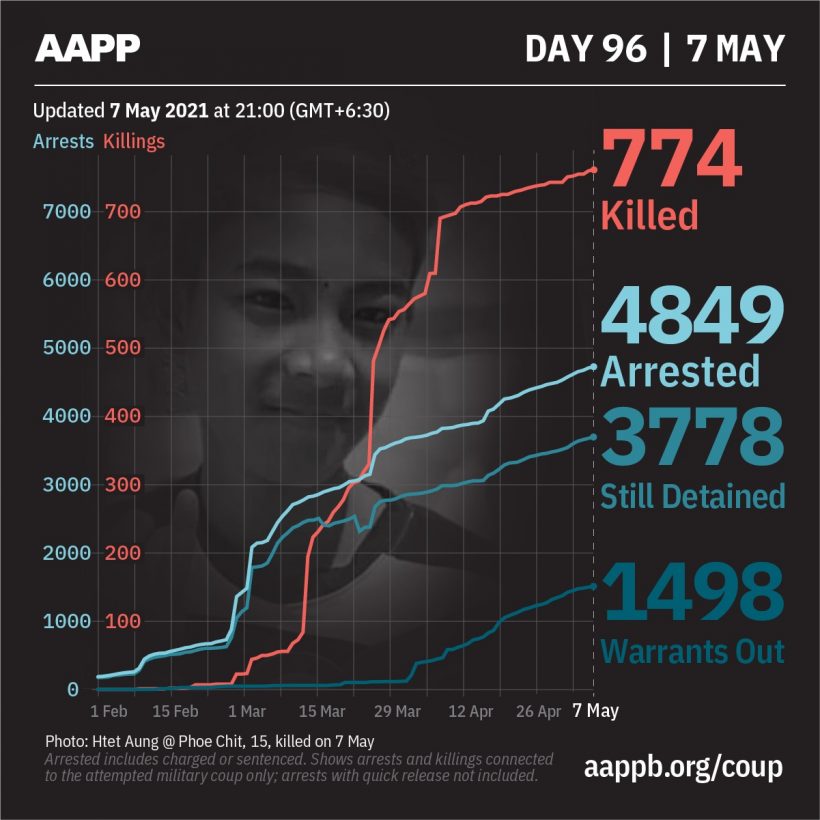 As of 7 May, (774) people are now confirmed killed by this junta coup. The Assistance Association for Political Prisoners (AAPP) compiled and documented (2) fallen heroes today. (1) from Myingyan Township in Mandalay Region died on 7 May. (1) from Kani Township in Sagaing Region was killed yesterday and documented today. This is the number verified by AAPP, the actual number of fatalities is likely much higher. We will continue adding as and when.

As of May 7, a total of (3778) people are currently under detention; of them (84) are sentenced. 1498 have been issued arrest warrants; of them 20 were sentenced to death and 14 to three years imprisonment with hard labour, who are evading arrest. We are verifying the recently released detainees and continuing to document.

Today across Burma, including in Mandalay City and Yangon City, people staged powerful protests in defiance of the coup. This morning in Rangoon, a Tamwe protest was suppressed, the police chased the protesters into the streets and buildings. At least 6 youths were arrested.

Unprovoked shootings by the junta have escalated, children are also being affected. Early this morning, in Le Thit Village, Myingyan Township, Mandalay Region, after an explosion at the house of the junta appointed ward administrator, junta troops came and shot a 15 year-old, 9th grade student in the head. The junta troops took the dead body. The daily violence, looting, destruction of buildings, and makeshift military bases by the junta have led civilians to form defense forces to defend themselves. Yesterday a young man was killed in a clash between the junta and the People’s Defense Forces in Kani Township, Sagaing Region. Last night the junta threatened to set fire to neighborhoods because people were banging pots and pans in Maha Myaing housing, North Dagon Township, Yangon Region. In Sanchaung Township, the junta violently raided the Asia Royal Hospital, searching every floor, looking for a patient’s acquaintance. The junta are committing atrocities without limits.

The junta group is taking hostages every day. On the morning of 6 May, in Pathein, Irrawaddy Region, a young protester was not found. Instead his mother and brother were taken hostage. On the night of May 5, in Mudon Township, Mon State, the junta went to a protest leader’s house. His wife and a twenty-day-old baby were detained. The junta group is trying to be legitimate in various ways, whilst holding onto power through an illegitimate  coup. The SAC is an illegal organization.

As of May 7, a total 59 people have been taken as  hostage, according to AAPP documentation. No effective action has been taken against the daily human rights abuses of this junta. People from some townships in Sagaing Region and Chin State are defending themselves, and heavy fighting is taking place between the ethnic armed groups and the junta in Kachin and Karen States. If no action is taken by the international community or ASEAN, civil war will engulf all Burma.