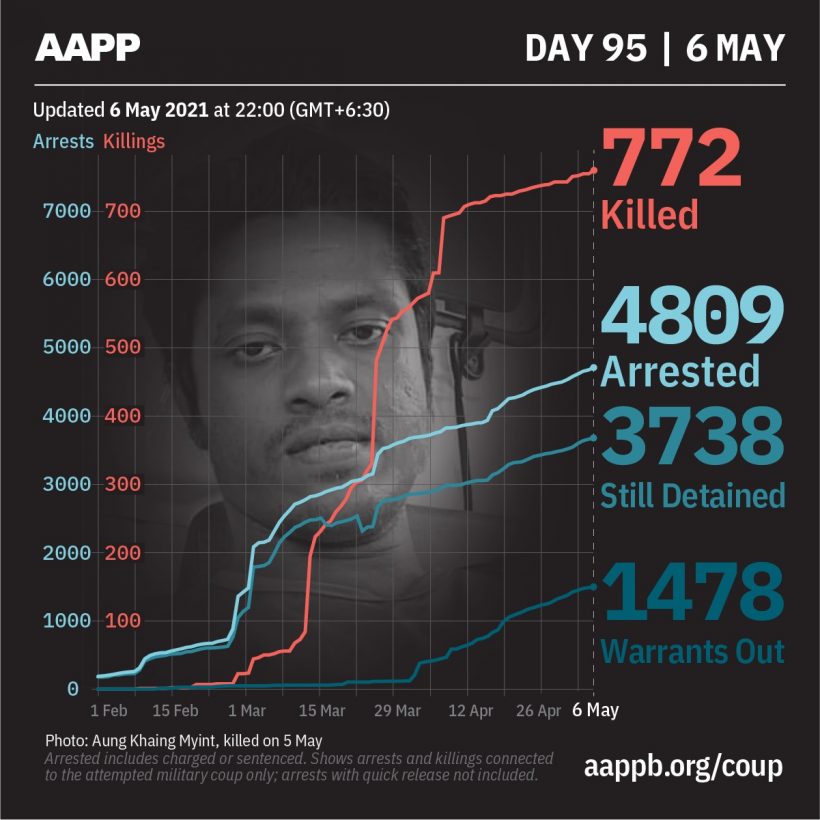 As of 6 May, (772) people are now confirmed killed by this junta coup. The Assistance Association for Political Prisoners (AAPP) compiled and documented (3) fallen heroes today. These 3 from Pyay Township in Bago Region, Gangaw Township in Magway Region and Meiktila Township in Mandalay Region were killed on previous days and documented today. This is the number verified by AAPP, the actual number of fatalities is likely much higher. We will continue adding as and when.

As of May 6, a total of (3738) people are currently under detention; of them (84) are sentenced. 1478 have been issued arrest warrants; of them 20 were sentenced to death and 14 to three years imprisonment with hard labour, who are evading arrest. We are verifying the recently released detainees and continuing to document.

It has been 95 days since the military coup, people have been protesting daily against the military dictatorship for a return to democracy, peace and human rights. Many people have been killed and injured, and face various atrocities and threats.  On 6 May, demonstrations and strikes continued across Burma. In Pazundaung Township, Yangon Region,  the “Yay Kyaw strike” was crackdown and followed  by patrol cars and motorcycles but the protestors successfully got away. At noon today, in Myittha Township, Mandalay Region, a military and the police detention vehicle arrived and searched Dar Kaung village, forcing most of the local youths to flee. In the crackdown on the village, one person was shot by a rubber bullet and another was arrested.

Yesterday evening and night, the junta group was shooting unprovoked but intentionally at civilians around Burma, some were wounded and killed. Yesterday in the afternoon, in Aungmyaythazan Township, Mandalay Region, the junta shot at a motorcycle driver because he did not stop. He got away but a woman was shot and killed while she was waiting to get her covid vaccination. Last night, in Meiktila town, Mandalay Region, a civilian on a motorcycle was shot dead. Further details of the fallen man are still being investigated.

When civilians are arrested, they get inhumanely tortured. It is a crime committed by many dictatorships. Last night, a young man was taken out of the house for questioning, at the end of the street he was brutally beaten. They put clothes in his mouth while beating him, after he was taken away the parents were told to give 2 million kyats for him to be returned. As the family were preparing this, they got a phone call to come and confirm his dead body at the hospital. This young man’s dead body had neck and face injuries consistent with torture. The family were not allowed to bury the body. Yesterday in Lashio Township, Shan State, a social media video emerged which showed the junta group arresting and beating youths.

In Thamantaw village, Magway Region, the junta destroyed villagers’ storage of rice, and sesame and cooking oil, now the villagers are experiencing food shortages. The village elders were forced to shout words from the “Spring Revolution Song”. They were beaten, whilst some other villagers fled, the junta beat a young man to death from Thamantaw village. Since the coup, these barbaric incidents are carried out in public, and in secret by the terrorist regime. The right to life and security is a fundamental right, as long as dictatorship continues people’s daily lives will always be threatened.