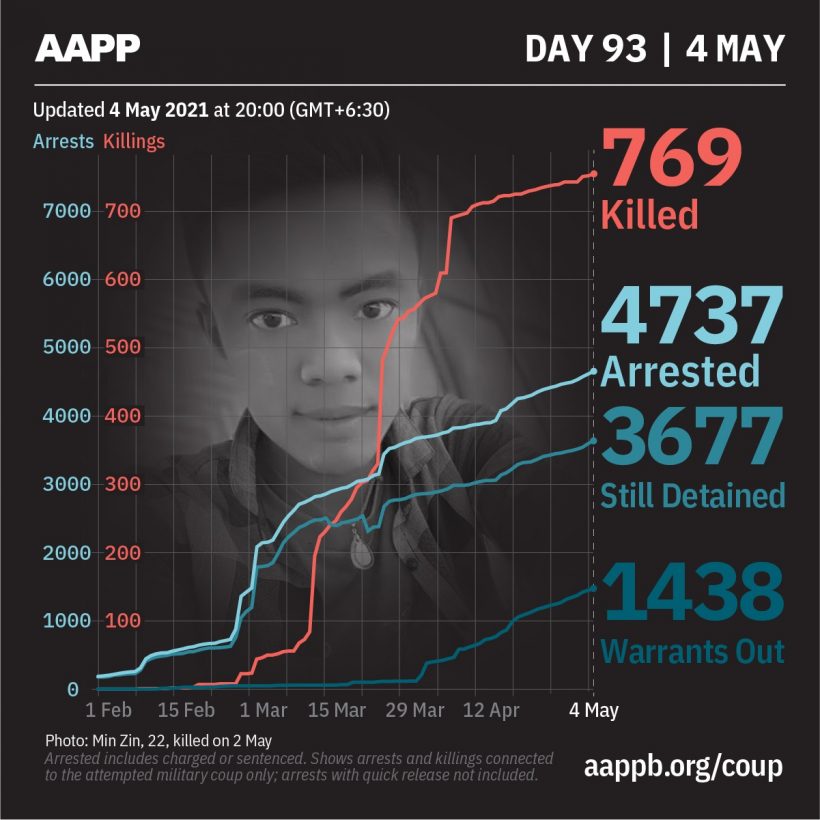 As of 4 May, (769) people are now confirmed killed by this junta coup. The Assistance Association for Political Prisoners (AAPP) compiled and documented (3) fallen heroes today. These 3 from Launglon Township in Tanintharyi Region and Htilin Township in Magway Region were killed on previous days and documented today. This is the number verified by AAPP, the actual number of fatalities is likely much higher. We will continue adding as and when.

As of May 4, a total of (3677) people are currently under detention; of them (83) are sentenced. 1438 have been issued arrest warrants; of them 20 were sentenced to death and 14 to three years imprisonment with hard labour, who are evading arrest. We are verifying the recently released detainees and continuing to document.

People across Burma continued to protest against the dictatorship today, including in Mandalay, Yangon, and other cities. Students protested the subjugation to military rule education, starting a “do not go to school and drop out” campaign. Today in Nyaung Oo Township, Bagan town, Mandalay Region the junta arrived and opened fire on a protest, people were able to disperse quickly and there were no arrests and injuries. Yet, the junta group has been shooting at civilians day and night. It is a worrying situation for those protesting dictatorship.

On May 3, at noon in Suuphyukone village, Nwathogyi Township, Mandalay Region, at a protest the junta police arrived. The villagers did not allow so-called police to enter, then the military arrived and started shooting, some villagers were injured and 19 arrested. The junta is regularly searching to arrest using the Ward and Village Tract Administration Law at night, beating up, killing, raiding, berating and torturing civilians. People have formed a defense force in Htilin Township, Magway Region, to protect the community. Since yesterday up until today, there were clashes between the junta group and the people’s defence force, who said at least three civilians were killed, the  junta  group instead announced only three were killed. AAPP has so far only verified one fatality, we are continuing to identify the remaining victims.

Villagers from and around Htilin Township are fleeing. Terrorists are carrying out raids, robbing, and destroying without any limits, a practice now again widespread in the rural areas.

Despite experiencing these severe human rights abuses and violence on a daily basis, people in Burma are still being ignored. ASEAN in particular needs to exert stronger pressure on Burma, the international community needs to enforce powerful action. Delayed responses will result in even more casualties and suffering for civilians.