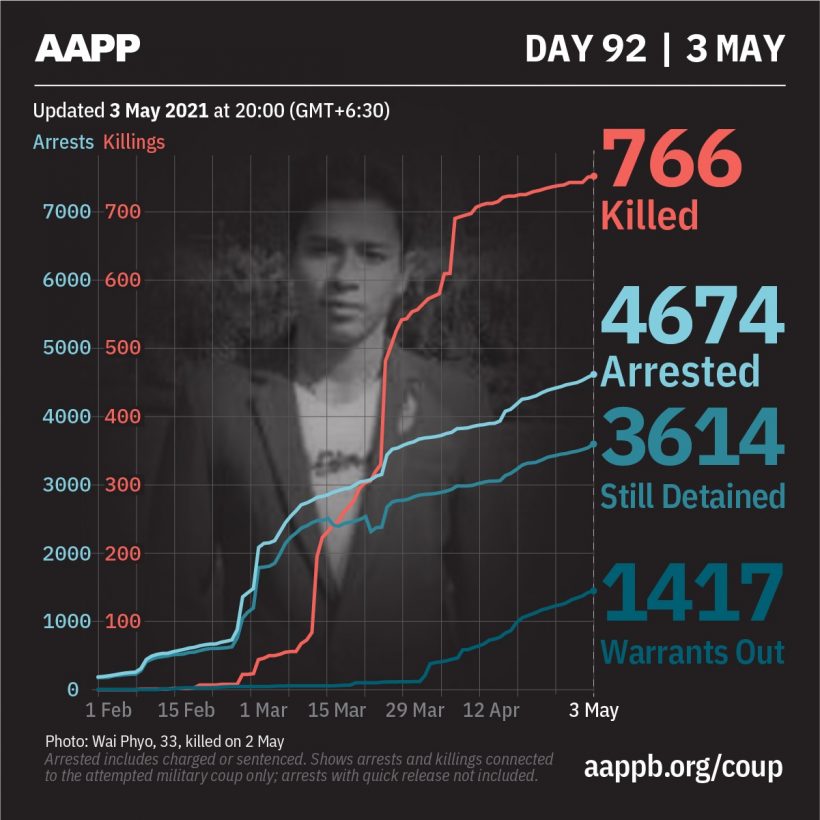 Today was World Press Freedom Day, The Assistance Association for Political Prisoners (AAPP) honors the importance of news media in Burma, journalists have been providing accurate information in the face of suffering and oppression inside the country. Freedom of press in Burma has collapsed since the coup. (84) have been detained at one point since the coup. 50 journalists are currently detained, 25 of whom have been prosecuted. This is in addition to two journalists on bail awaiting trial, and 29 journalists evading arrest warrants. Freedom of press will disintegrate and journalists will be persecuted as long as we have a dictatorship.

As of May 3, a total of (3614) people are currently under detention; of them (83) are sentenced. 1417 have been issued arrest warrants; of them 20 were sentenced to death and 14 to three years imprisonment with hard labour, who are evading arrest. We are verifying the recently released detainees and continuing to document.

Even though people were killed in violent crackdowns yesterday, people from all over Burma continued in protest against the junta today. In Taungdwingyi town, Magway Region, junta forces chased and shot at vendors on motorbikes. Two people were injured.

The depravity of this junta is on display in raids on HIV/AIDS patient centers. Yesterday in East Dagon Township, Yangon Region. The center was stormed and junta troops took three children on ART medication and nine others seeking medical treatment for arrest. These patients need daily and timely medication, without this access their health condition will deteriorate and hence we are rightly concerned.

The junta destroy property of the civilians in various ways. Last night, at 46-47 Street, General Aung San Road, Rangoon, the junta threw stones at houses, sprayed abusive words on cars, and destroyed windows of all cars parked alongside the street. Those actions make visible the lawlessness and intentions of this junta – it is to destroy the rule of law.

Conflict continues in Kachin State. The Kachin Independence Army (KIA) shot down a military helicopter near Kone Law village, Momauk Township, Kachin State on 3 May. The terrorists used artillery to fire at Kone Law village in response, killing a monk and injuring 10 villagers this afternoon. Atrocities committed by the junta in both rural and urban areas get worse day by day since the coup. Peace is absent as the junta steps up its attacks on ethnic people who feel the full brunt of the devastating effects of the war again.