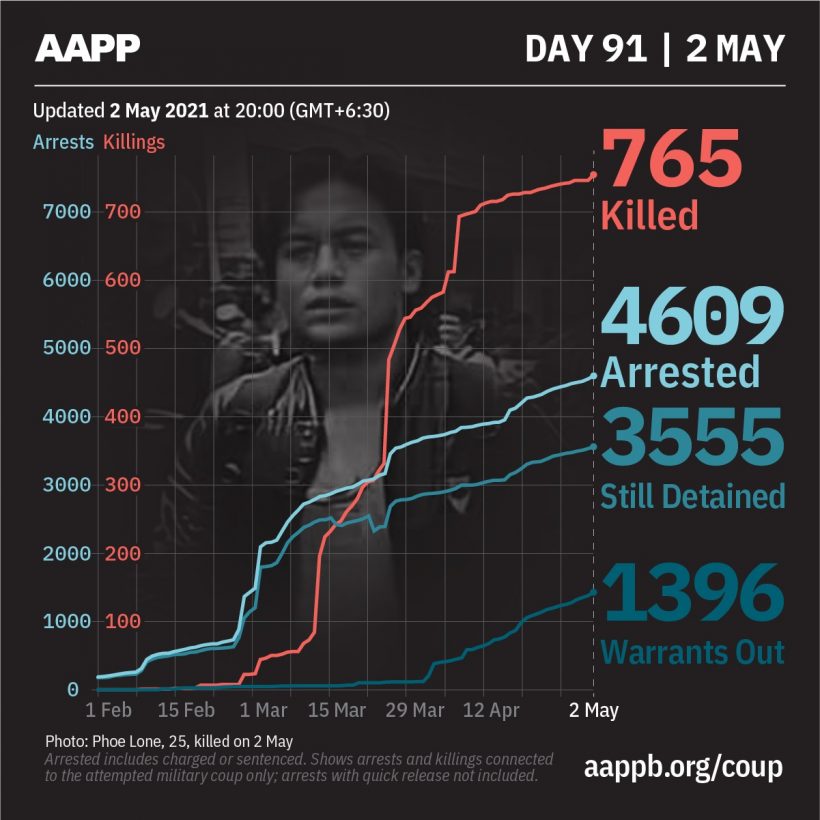 As of 2 May, (765) people are now confirmed killed by this junta coup. The Assistance Association for Political Prisoners (AAPP) compiled and documented (6) fallen heroes today. (2) from Hsipaw Town and Nawngcho Town in Shan State, (1) from Hpakant Town in Kachin State and (2) from Wetlet Town in Sagaing Region died on 2 May. (1) from Kutkai Town in Shan State was killed yesterday and documented today. This is the number verified by AAPP, the actual number of fatalities is likely much higher. We will continue adding as and when.

As of May 2, a total of (3555) people are currently under detention; of them (82) are sentenced. 1396 have been issued arrest warrants; of them 20 were sentenced to death and 14 to three years imprisonment with hard labour, who are evading arrest. We are verifying the recently released detainees and continuing to document.

On 2 May, across the world and inside Burma, people powerfully protested the coup regime on the Global Myanmar Spring Revolution Day. Since the ASEAN leaders meeting, junta forces continue to perpetrate violence, today was the bloodiest day since the ASEAN meeting, at least five civilians were killed in one day. This is alongside increasing arrests.

Two people were killed, and three others injured during a violent crackdown at an anti-dictatorship protest today in Hsipaw Town and Naungcho Town, Shan State. The Hpakant strike was repressed with live ammunition, mines, and hand grenades. One protester was shot dead in Hpakant, Kachin State. More than 20 people were injured and chased forcing the protestors to hide. There is great concern for these injured protesters’ access to medical treatment. Terrorists also arrested more than 10 civilians by breaking and destroying house doors in Hpakant. The junta also opened fire whilst people were gathering to begin a protest in Wetlet Town, Sagaing Region. Two men were shot dead, and eight others injured.

The terrorist troops are now wearing plain clothes, carrying combat weapons, and arresting protestors so it is less easy to be recognized by civilians.  Junta forces are also hiding to ambush and shoot. Two civilians were killed and at least five others were arrested today by this way in Mandalay City. AAPP is consolidating further information to verify this.

Junta forces went to the Eain Phyu Taw spare auto parts store to allegedly buy car tires in Kutkai Town, Shan State on 1 May. The victim’s mother said the store was closed and they had stopped selling because of the ending of the fasting period. The victim’s mother was dragged into a car by the junta forces and an argument between the son and the terrorists broke out, he was then shot twice in the chest and died.

Aside from all this, today the terrorist group crackdown on protests and arrested civilians in Mogaung Town, Kachin State, Mawlamyine City, Mon State, Mandalay and Pyugyidagun Townships, Mandalay Region, Monywa City, Sagaing Region, and Hlaing, Insein, and North Okkalapa Townships, Yangon Region. Some civilians across the country were injured.

The junta stormed a school for the blind based in the Khawel Chan, Yangon Region last April and raided a girl orphanage house on Byaing Yay Oe Zin Street on 1 May nighttime in Tamwe Township, Yangon Region. During the raid, the door of the shelter was stormed and destroyed, the young women living in the shelter were taken out one by one. As of now, it has not been confirmed regarding arrests. Although Myanmar ratified to the Convention on the Elimination of All Forms of Discrimination against Women (CEDAW), these rights have been dismantled by the dictatorship, women are suffering from both mental and physical insecurity.