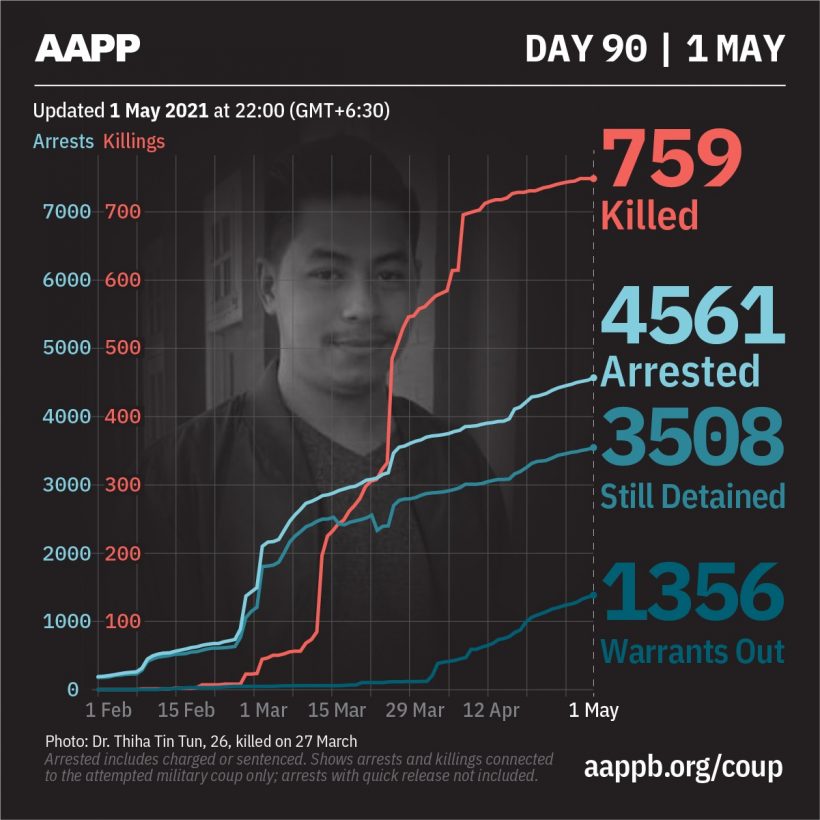 As of 1 May, (759) people are now confirmed killed by this junta coup. The Assistance Association for Political Prisoners (AAPP) has not yet confirmed any fallen heroes today. This is the number verified by AAPP, the actual number of fatalities is likely much higher. We will continue adding as and when.

As of May 1, a total of (3508) people are currently under detention; of them (82) are sentenced. 1356 have been issued arrest warrants; of them 20 were sentenced to death and 14 to three years imprisonment with hard labour, who are evading arrest. We are verifying the recently released detainees and continuing to document.

1 May 2021 marked International Labor Day. AAPP honors the active participation of the entire labor movement, who have been on the front lines of this Spring Revolution. People across Burma continue to fight against injustice and dictatorship. Today, seven civilians, who did not even take part in the protest were arrested after the junta forces arrived in vehicles and attacked the strike in Insein Township, Yangon Region. Two civilians were ordered to stop while riding a motorcycle near 38×39, 78th Street, Mandalay City, Mandalay Region and were shot in the abdomen and knees when they did not stop, last night

The terrorist group is now repressing charities. In Myitkyina this morning a group of 11 youth involved in a free food campaign and around 30 people were arrested by junta troops in soldiers and police uniforms at gunpoint. In Mandalay Region, Mogok Town, Kyat Pyin Ward, the Ruby Yadanar clinic was looted and all medical supplies worth around 1,500,000 kyats (US$965) were taken by the junta group. Yesterday evening in Bago Region, Pyay town, two funeral vehicles belonging to the Moe Metta Funeral Service were seized. The junta does not even exempt charity and philanthropy from its violent acts.

On April 29, Ngaputaw Township the ward administrator of Ngup Kaung was kidnapped, On April 30, the administrator for Ward 11, Mandalay Region, Pyin Oo Lwin Township was also arrested. The terrorists are arresting and detaining influential people in society, the junta are trying to establish their administrative power in incendiary ways.

It has been 90 days since the coup and the situation inside Burma remains extremely unstable. Administration, the judiciary, legislature collapsed, media attacked. A so-called agreement at ASEAN leader meeting on Burma has not had a significant impact on the coup. A closed-door meeting was also held by the UN Security Council yesterday but likewise no specific agreement was made. People across Burma are facing brutal junta perpetrated violence on a daily basis.